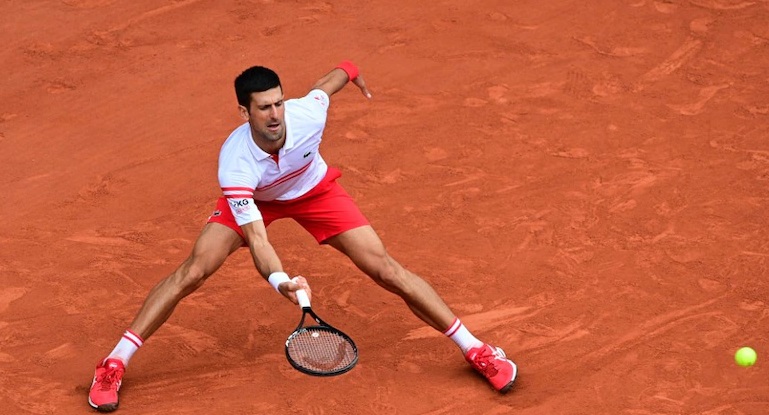 Novak Djokovic battled back from two sets down to reach the French Open quarter-finals for the 15th time on Monday as 17-year-old Coco Gauff became the youngest woman to reach a Grand Slam last eight since 2006. World number one Djokovic stayed on course to become the first man in over 50 years to win all four Slams twice after surviving a rousing challenge from 19-year-old Lorenzo Musetti. The Italian teenager, ranked 76 and making his Grand Slam debut, was poised to condemn Djokovic to his earliest exit in Paris in 12 years when he captured the first two sets, 6-7 (7/9), 6-7 (2/7).

But Djokovic levelled by taking the next two sets, 6-1, 6-0 before Musetti, who had taken a medical time-out, retired at 4-0 down in the decider suffering from a stomach injury.

It was the fifth time in his Grand Slam career that the 34-year-old Djokovic has come back from to sets down to win.

Djokovic, the 2016 champion and chasing a 19th major, reeled off 53 of the last 61 points against the weary Italian as he made a quarter-final at the majors for the 49th time.

Nadal, who is seeded to meet Djokovic in the semi-finals, defeated 19-year-old Sinner in the quarter-finals in 2020.

At just 17, she is the youngest woman to reach the last eight of a Grand Slam since Nicole Vaidisova who made the quarter-finals at Roland Garros in 2006.

Gauff is also the youngest American woman to book a place in the last eight in Paris since Jennifer Capriati in 1993.

In a composed performance on Court Philippe Chatrier, the American teenager, seeded 24, broke her Tunisian opponent three times without facing a break point herself.

“I am super happy to reach my first Grand Slam quarter-final. I played really well,” said Gauff who has yet to drop a set and also learned she had claimed a place on the American team for the Tokyo Olympics.

Gauff, who famously raced to the Wimbledon fourth round in 2019 as a 15-year-old qualifier, faces Barbora Krejcikova for a place in the semi-finals.

The 33rd-ranked Czech also reached her first Grand Slam quarter-final with a 6-2, 6-0 win over 2018 runner-up and former US Open champion Sloane Stephens.

However, last year’s runner-up Sofia Kenin, the fourth seed, was knocked out by Maria Sakkari 6-1, 6-3 as the Greek also made the quarter-finals of a Grand Slam for the first time.

The world number 18 will face either reigning champion Iga Swiatek or Ukrainian teenager Marta Kostyuk for a place in the last four.

“I’m speechless. I love Paris. I’m having a great time and I don’t want to leave anytime soon,” said Sakkari.

Schwartzman, who will face either Nadal or Sinner, saved seven set points in the first set as he rallied from a 5-1 deficit against the 42nd-ranked Struff.

Swiatek, the only top 10 seed left in the women’s draw, has not dropped a set at the tournament in her last 10 matches.

Kostyuk, ranked 81, made her breakthrough at the 2018 Australian Open.

Just 15 at the time, she became the youngest player to reach the third round of a Grand Slam since 1997.