Novak Djokovic stunned by Dan Evans at Monte Carlo Masters: One of my worst performances. 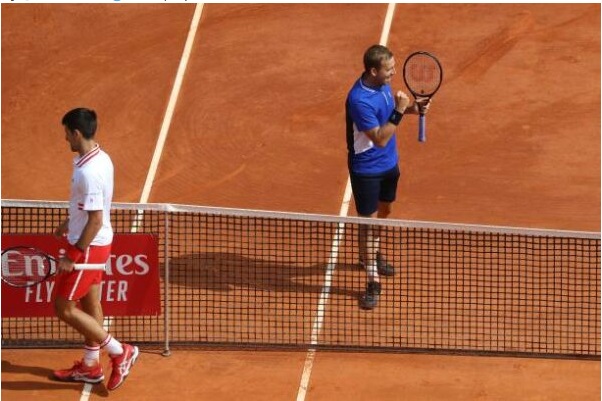 World No. 1 Novak Djokovic lamented an ‘awful performance after he was knocked out by Britain’s Dan Evans in the third round of Monte Carlo Masters, the first major tournament of the clay-court season on the tour. Djokovic, playing only his 2nd match since the Australian Open triumph in February, was ousted in straight sets – 6-4, 7-5.

Notably, the one-sided defeat brought an end to Novak Djokovic’s perfect record of 10-0 in the season. Djokovic was far from his best as he had no rhythm on a windy day in Monte Carlo, making as many as 45 unforced errors.

Dan Evans had won only 4 matches on clay before he came to Monte Carlo for the Masters 1000 tournament but he put on a show against Djokovic to register his first win over a top-6 player on the tour.

Djokovic did not hold back as he rued the disappointing performance on the red dirt. “To be honest, this has been probably one of the worst matches and performances from my side I can recall in the last years,” Djokovic said after his loss on Thursday.

“I don’t want to take anything away from his win, but from my side, I just felt awful on the court overall. Just nothing worked. It’s one of those days. From my side, I definitely should have done better. As I said, definitely that’s been one of the worst performances I can remember in many years.”

Plenty of tournaments to improve on clay: Djokovic upbeat

Djokovic said he was exiting with a “bitter” feeling but hoped he can turn things around as he heads home to play the Serbia Open next week. The Serb pointed out that it’s a long clay season before the top stars head to Roland Garros, scheduled between May 30 and June 16.

“Just was obviously very, very windy, tough to play in this kind of conditions against a guy like Evans who makes you move,” he added. “He’s very unpredictable with his shots. He dismantled my game. I was just not feeling it, and playing pretty bad.

“Obviously right now, as I walk off the court, I’m disappointed with the way I played, the way I felt on the court. But it’s a long clay season. Still plenty of tournaments, plenty of room to improve. Obviously, I have to work, hopefully, get a better performance next week in Belgrade.”