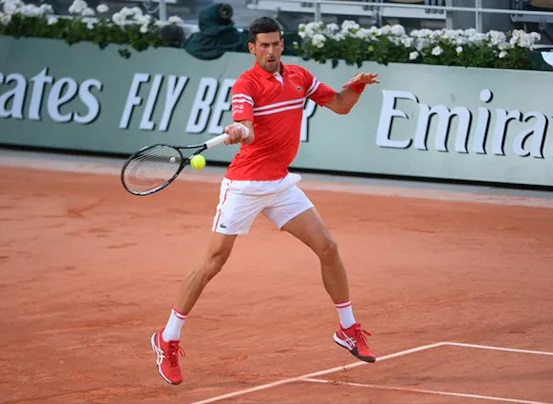 Novak Djokovic set up a 58th meeting with Rafael Nadal on Wednesday when he reached his 40th Grand Slam semi-final at the French Open despite being held up by 5,000 fans needing to be evacuated to conform with a COVID-19 curfew. World number one Djokovic defeated Italy’s Matteo Berrettini 6-3, 6-2, 6-7 (5/7), 7-5 to book his place in the last four in Paris for the 11th time. Earlier, Nadal, the 13-time champion, beat Argentina’s Diego Schwartzman 6-3, 4-6, 6-4, 6-0 to make the semi-finals for the 14th time. With Djokovic’s match extending beyond the national 11pm curfew, play was halted for around 20 minutes at 3-2 in the fourth set so that 5,000 fans could be funnelled out of Court Philippe Chatrier.

Djokovic eventually claimed the match on a third match point in the 12th game of the fourth set but only after the Serb had kicked out at an advertising board in frustration at missing the first two.

“It was a release of all the emotions I had kept inside me,” said Djokovic who hit 44 winners and saved all three break points he faced.

“After all the fans left and the little break it wasn’t easy to find rhythm.”It was really a very difficult match for me.”

He added: “It was a great battle against a player who serves well and is powerful. Maybe I could have finished on the tie break, but I’m happy to have won.”

Friday’s semi-final will be the eighth between Djokovic and Nadal at Roland Garros where the Spaniard has a commanding 7-1 advantage.

That includes last year’s final but Djokovic remains just one of two men to have defeated Nadal at the tournament.

Both players have history on their minds in Paris.

Djokovic, an 18-time major winner and 2016 French Open champion, is looking to become the first man in more than half a century to win all four Slams twice.

Nadal, meanwhile, can win a record-setting 21st major with victory in Sunday’s final, edging ahead of Roger Federer in the all-time race.

For the first time fans were allowed to attend an evening session at this year’s tournament thanks to an easing of Covid-19 restrictions.

The 5,000-strong crowd watched as Djokovic took command against Berrettini who had made the quarter-finals when Federer withdrew from the tournament.However, play was halted just before 11pm to allow spectators to leave.

“We paid 500 euros for two and a half sets of a match. It’s unacceptable,” said one man watching the quarter-final with his wife and two children.

“They should have started at 7pm and not 8pm.”Wednesday was the 10th and final evening session of the tournament.

However, it was the first which welcomed spectators after Covid-19 restrictions were eased and a 9pm curfew pushed back to 11pm.

Both Djokovic and Berrettini left the court while the stadium was cleared with the match resuming around 20 minutes later.