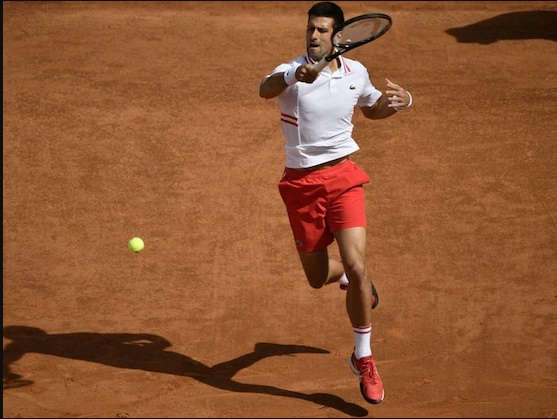 Novak Djokovic eased into the final of the ATP tournament in Belgrade on Friday despite losing his form in the second set, beating Slovakia’s Andrej Martin as he steps up his French Open preparations. The world number one saw off his 119th-ranked opponent 6-1, 4-6, 6-0 to set up a Saturday final against another Slovakian in Alex Molcan, who beat Argentina’s Federico Delbonis 4-6, 6-4, 6-4 in Friday’s other semi-final.

It will be the Serbian’s third final of the year after his Australian Open triumph and his final loss to Rafael Nadal at the Italian Open last week, but his first on home soil since 2011.

“I’m super excited to play in front of a Serbian crowd. This is my home town. I’m always excited, but also nervous, coming out on the court and playing in front of my home crowd,” Djokovic said.

“It’s a very unique feeling. You feel a lot of pressure and expectations. But I’m just happy to fight for a trophy tomorrow.”

After racing through the first set against Martin, Djokovic uncharacteristically took his foot off the gas and was broken three times in the second set.

The 34-year-old was back to his best in the decider, though, quickly ending any thought of a surprise comeback.

“I thought I started and finished the match really well, so I’ll try to take those positive feelings into tomorrow’s final,” Djokovic said.

“I also had some letdowns in concentration towards the end of the second set, and I’ll try to correct those mistakes for tomorrow.”

Djokovic passed Guillermo Vilas to move fifth on all-time ATP list of match wins with his quarter-final victory over Federico Coria on Thursday.

He has been drawn in the same half of the draw as his old rivals Rafael Nadal and Roger Federer for the French Open, which starts at Roland Garros on Sunday.