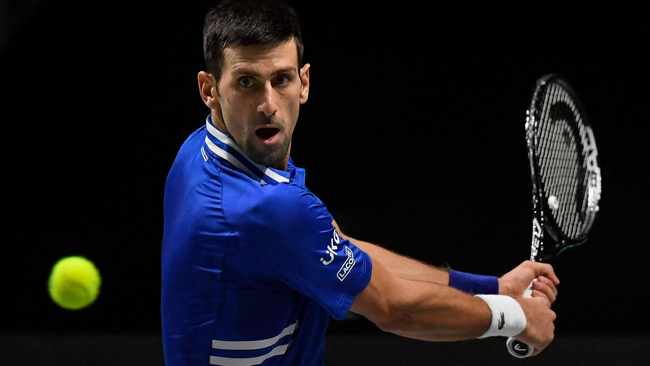 Novak Djokovic, whose lawyers said Saturday he was given an Australian Open Covid-19 vaccine exemption for testing positive on 16 December, was at a young players event in Belgrade the following day, without a mask.

In a filing to the federal court seeking to overturn his entry visa cancellation his lawyers said that the “date of the first positive Covid PCR test was recorded on 16 December 2021”.

The Belgrade tennis federation, in a Facebook post after the December 17 ceremony, reported that Djokovic had handed over cups and awards to best young players in 2021.

The event, held at the Novak tennis centre in the Serbian capital, was attended only by the award winners “due to epidemiological measures related to the coronavirus pandemic”, said the federation statement.

It was accompanied with several photos of Djokovic, posing with the federation’s officials and some 20 young players holding cups and awards.

No one was wearing a mask.

At the ceremony, the federation head Milan Slavkovic presented Djokovic with an Orthodox icon for “all he has done for tennis and sports in general, for all achievements and generosity he is making every day throughout the planet”, the statement said.

The event was widely reported in the Serbian media.

Djokovic attended another gathering on 16 December, when the Serbia national postal service honoured him by launching a series of stamps featuring him and his sports achievements.

He published a photo from the ceremony on Instagram on 17 December.

Australian border agents tore up Djokovic’s entry visa for failing to meet the country’s tough Covid-19 vaccine requirements when he landed in Melbourne on Wednesday.

The 34-year-old Serb, an outspoken vaccine sceptic, was placed in a Melbourne detention centre.

His detention has fuelled anger and charges of racism in his native Serbia where the president has evoked a “political witch hunt” and the country’s religious leader has called for the nation to offer prayers for their favourite son.

For two consecutive days hundreds have rallied in Belgrade to voice support for the tennis star, with a new protest due later Saturday.

Meanwhile, his brother said that Djokovic could have left Australia by now but has not done so in order not to “partly admit the guilt that absolutely does not exist”.

Djokovic will have his appeal heard in court on Monday.

“I believe the court will bring a just decision … since Novak did nothing to be treated like a criminal,” his brother Djordje Djokovic told Croatian RTL television late Friday.

Asked whether the world number one would still play at the tournament if the court rules in his favour he said that the player does not know that right now.

“He is filled with emotions at the moment … tennis and the Grand Slam are currently the last things on his mind.

“The only thing he wants is the justice to be served and the truth revealed,” the brother said.

Prime Minister Ana Brnabic assured Serbia was doing all possible to make the whole situation easier for the player and said she had held “constructive talks” with Australian Foreign Minister Marise Payne over the issue.

“We are fighting … The whole thing is extremely emotional,” she said in an interview with Pink television.

Until the court ruling Djokovic remains at an immigration detention centre, she said.

“We managed that he gets gluten-free food, exercise equipment, a laptop”.

But, parliamentary speaker Ivica Dacic accused the Australian authorities of “politicising” the issue.

“Novak is already a winner … this is the way to prevent him to become the best tennis player in history”, Dacic said.

Djokovic has also requested to be moved to a facility where he can train for the Australian Open, his lawyers said.

Foreigners are still mostly banned from travel to Australia, and those granted entry must be fully vaccinated or have a medical exemption.