Not Happening! Arsenal Owner Stan Kroenke Rules Out Sale of the Club. 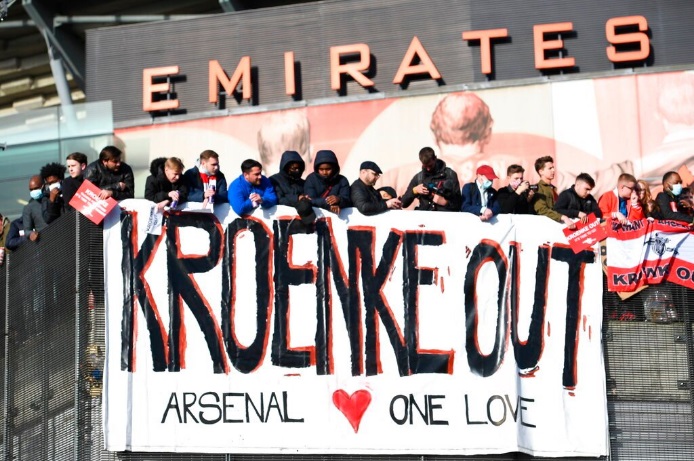 Arsenal owners Stan and Josh Kroenke said on Tuesday they remain “100% committed” to the Premier League club, are not selling any stake, and have not received and will not entertain any offers.

Arsenal was among six English clubs who signed up for the proposed European Super League project before withdrawing amid a storm of protest from fans, players, and the British government.

Thousands of Arsenal fans gathered outside Emirates Stadium ahead of the Premier League game against Everton on Friday to protest against the owners following the north London club’s part in the attempt to form the breakaway League. Arsenal lost 1-0 to Everton, which left the Gunners 10th in the standings.

Stan Kroenke has said any takeover talk is not welcome.

“In recent days we have noted media speculation regarding a potential takeover bid for Arsenal Football Club,” Kroenke said in a joint statement with his son and director Josh.

“We remain 100% committed to Arsenal *and are not selling* any stake in the Club. We have not received any offer and we will not entertain any offer.

“Our ambition for Arsenal remains to compete to win the biggest trophies in the game and our focus remains on improving our competitiveness on the pitch to achieve this.”

Former Arsenal manager Arsene Wenger said he was in favor of his former players being involved in a potential takeover and offered to help the club in any way possible.

“You have two examples in the football world, former players who run a club like at Bayern Munich or big investors who buy a club like Manchester City,” Wenger told beIN Sports.

“I personally, as a football man, like the fact that former Arsenal players take over and have advice … I will always support Arsenal, and if I can help them I will do it as well in any way.”

Proposals for a partially closed Super League involving 12 of the top clubs in England, Spain, and Italy collapsed last week. Arsenal’s involvement further alienated the fans who have protested against Kroenke’s ownership on several occasions.

Last week, Arsenal manager Mikel Arteta said Stan Kroenke, CEO Vinai Venkatesham, and other figures at the club involved in the Super League plan had apologized to the players and himself.

Leicester winger Barnes out for season will miss Euro 2020.
Madrid and Chelsea draw 1-1 in the first leg of Champions League semifinals.