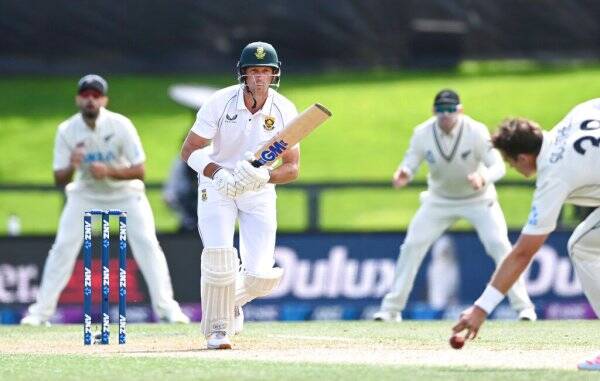 Sarel Erwee responded to a challenge leveled by his captain with a maiden century for South Africa on Friday against New Zealand on the first day of the second Test.

Erwee’s 108 helped South Africa to 238-3 at stumps and gave them insulation against a setback late in the day when Erwee and Aiden Markram’s (42) wickets fell within the space of three balls. Temba Bavuma was 22 not out at stumps and Rassie van der Dussen 13. The day belonged to the Proteas and Erwee did South Africa great service in only his second test by carrying his bat through the first two sessions, restoring some of the confidence of the tourists’ batsmen in themselves. AP

Proteas captain Dean Elgar threw down the challenge to his fellow batsmen Friday when he chose to bat on winning the toss on the same ground on which the tourists were dismissed for 95 and 111 in losing the first Test loss by an innings and 276 runs.

Elgar made 41 in an opening stand with Erwee which was worth as much as South Africa’s second-innings total in the first Test and which was their first century partnership for the first wicket in 34 tests.

With a fine sense of timing, Erwee reached his first half century just before lunch and his century in the over before tea, after exactly four hours at the crease.

“I wasn’t expecting (to bat first) until Dean came up to me this morning. You get used to it, these decisions that come so quickly and I guess it’s part of being an opening batter. You’ve got to be ready for these things and whatever comes your way you’ve got to throw a punch.”

The pitch at Hagley Oval wasn’t quite the seamer’s paradise on which New Zealand’s four-pronged pace attack thrived in the first test. But it was still green enough on the first morning for some commentators’ jaws to drop when Elgar announced his decision to bat first and explained it was important for South Africa to “front up” in the second test after their failure in the first.

He said the first-Test loss had “absolutely nothing to do with skill. Mentally we were beaten by ourselves.”

Elgar said the second-Test pitch appeared drier and less well-grassed than the first and he was proved right as the day progressed. The ball swung at times in overcast conditions and one such delivery from Tim Southee which swung in then straightened, hit the top of Elgar’s off stump.

Otherwise the day belonged to the Proteas and Erwee did South Africa great service in only his second test by carrying his bat through the first two sessions, restoring some of the confidence of the tourists’ batsmen in themselves.

Markram, who came to the crease on Elgar’s dismissal, was barely hanging onto his place at No. 3 after going 10 innings without a half century. He felt his confidence coming flooding back Friday as he settled into his innings on a pitch which became increasingly docile as the day progressed.

He had made 42 and put on 88 for the second wicket when he perhaps became too confident, driving at a ball from Neil Wagner which was wide of off-stump and edging a catch to Daryl Mitchell at first slip. South Africa was 199-2.

Two balls later Erwee drove at a wide full ball from Matt Henry and edge a catch to wicketkeeper Tom Blundell, leaving the Proteas 199-3. Temba Bavuma twice edged through at a catchable height through slips for four before that Henry over was complete.

Southee troubled Bavuma with the second new ball and Matt Henry worried van der Dussen who was dropped by Devon Conway at short midwicket when he was on 9. But no further wickets came New Zealand’s way and the first day mostly belonged to South Africa.