New Zealand vs Bangladesh: Thought would be ‘labelled a lunatic’ if I talked about winning against Kiwis, says Mominul Haque 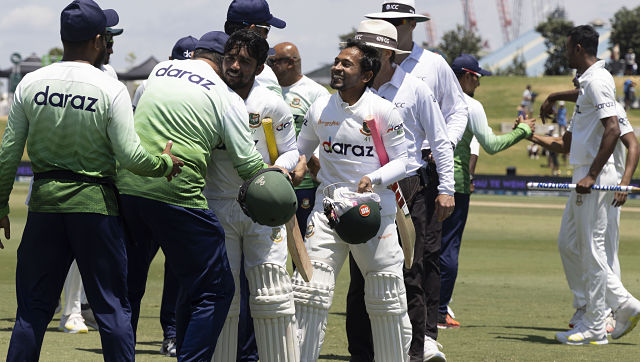 Mount Maunganui (New Zealand): Bangladesh captain Mominul Haque thought he would be “labelled a lunatic” if he even mentioned his team’s ambition to win a Test match in New Zealand.

So, it was not surprising when he was at a loss to describe how it felt the moment Bangladesh pulled off one of their biggest ever Test wins, at the picturesque Bay Oval here on Wednesday. Bangladesh captain Mominul Haque walks from the field after their win during play on Day 5 of the first Test between Bangladesh and New Zealand at Bay Oval in Mount Maunganui, New Zealand, on Wednesday. AP

Going to bed at the end of the fourth and penultimate day’s play, the tourists were in with a realistic chance of scripting history, but Mominul still couldn’t sleep.

“I can’t describe it, it’s unbelievable. I couldn’t sleep yesterday because of the pressure,” Mominul told reporters after his side’s eight-wicket win.

“To be honest, we didn’t think about winning the Test match at all. People would label me as a lunatic if I said that we were aiming for a win. Our aim was to prepare well and play according to the process,” he added.

For his opposite number Tom Latham though, it was plain and simple surprise at the grit shown by the visitors.

Ebadot had taken Bangladesh to the brink of a famous victory by the end of the fourth day when he had figures of 4-39.

He added to his tally in the fifth morning as New Zealand were dismissed in their second innings for 169, their lowest score against Bangladesh.

“I just told the bowlers that we need to bowl like the way we did on the fourth day and we will not go for the wickets. You can say that if we don’t go for wickets then how we will get them out?” Mominul said.

“The plan was that we cannot leak runs while going for the wickets. We just wanted to put pressure on them and if the result comes, it is fine,” he added.

The result ended New Zealand’s run of 17 matches without defeat on home soil.

“It was very important to win this Test match. Two years ago, we didn’t play that much Test cricket, so we were keen to improve.

“I think it was a team performance, we did very in all three departments. Our bowlers used the moisture really well, and the batters did really well too. I said previously that we need to win these Test matches for our legacy.

“We didn’t focus too much on the result of the Test matches, we tried to focus on the process,” Mominul said.

The second Test of the two-match series will be played at the Hagley Oval in Christchurch from 9-13 January, and the home team will be keen to come back strongly and restore parity.

Latham, who led New Zealand in the game, was left to rue two missed opportunities for his side after the shocking loss.

He said at the post-match press conference that he was surprised by the way Bangladesh performed.

“Both (surprised me), the way they were able to bat for a long period of time and also the way they operated with the ball. It was a passionate performance. They took every chance they had when the game was on the line,” Latham said.

“They will be excited when we go to Hagley Oval (for the next game), so it will be important that we stick as a group and train well and hit the game hard at Hagley Oval.”

He said he would want the bowlers to target the stumps more in the next Test.

“We could attack the stumps a little bit more. The ball was swinging, but we have not played too many games here (Bay Oval). It was just the third Test here and we didn’t have much information whether we could have gone a bit straighter earlier.”

India vs South Africa: Form is temporary but class is permanent and it’s true for Ajinkya Rahane and myself, says Cheteshwar Pujara
‘Elgar’s knock one for the memories’: Twitter lauds South Africa as they down India by 7 wickets to level series