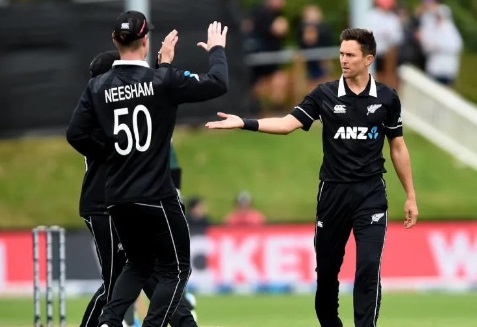 New Zealand captain Tom Latham called it “awesome” as star performers Trent Boult and Martin Guptill powered the Black Caps to an emphatic eight-wicket win over Bangladesh in the opening one-day international in Dunedin on Saturday. With swing king Boult moving the ball both ways, New Zealand dismissed Bangladesh for a mediocre 131 and a blistering cameo with the bat by Guptill saw them cut down the target with more than 28 overs to spare. In New Zealand’s first ODI in 12 months, Boult took four for 27 while Guptill blazed away for 38 off 19 deliveries.

“We haven’t played for a while and it was about setting the tone, winning the toss, and bowling and I thought Trent and Matt Henry did that great, and for us to chase 130 in 20-odd overs was awesome” captain Tom Latham said.

When Bangladesh lost the toss and was sent into bat opener and skipper Tamim Iqbal immediately looked to dominate with a six off Boult’s third ball and a four off the second over from Matt Henry.

But on a ground where the average winning score is in excess of 300, the tourists were soon in trouble when Boult took two wickets in his third over.

When the tourists were all out in the 42nd over, Iqbal said he knew 131 was nowhere near enough.

“There were too many soft dismissals. No doubt, they bowled extremely well but we played some loose shots. We have ourselves to blame,” he said.

Bangladesh came to New Zealand fresh from a 3-0 series win over the West Indies but while six Bangladesh batsmen reached double figures they did not persevere with Mahmadullah’s 27 from 54 deliveries the top score.

Mushfiqur Rahim with 23 was the only other batsman to get past 20.