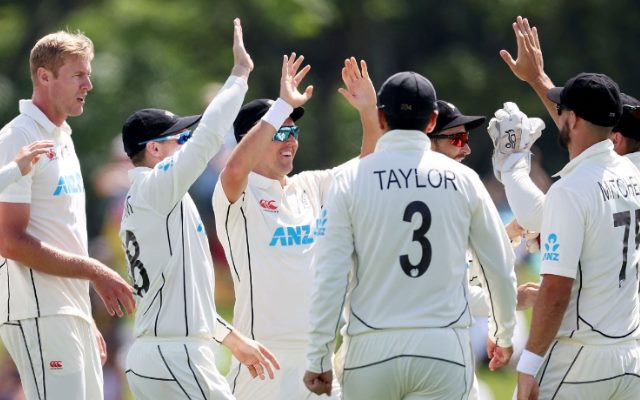 New Zealand have ruled out pace spearhead Trent Boult and retained the same 15-man squad for the second Test against South Africa after thrashing the Proteas by an innings and 276 runs in the series-opener over the weekend.

The Tom Latham-captained Black Caps are in prime position to claim a first Test series win against South Africa, leaving selectors in no mood to shake things up.

New Zealand head coach Gary Stead said Boult, who missed the first test for the birth of his third child, was not ready to rejoin the team for the second match starting on Friday due to a lack of training.

“We just felt the risk of him playing was far too great at the moment to do that to him,” Stead told reporters on Monday.

Selectors also declined to add a specialist spinner to the squad, expecting the pitch at Christchurch’s Hagley Oval to play similarly to last week’s clash.

Boult’s absence means pacer Matt Henry will almost certainly have another chance after his nine-wicket haul in the first Test, which included career-best innings figures of 7-23.

“He’s always been a good bowler and sometimes you need that opportunity to strike and make the most it,” Stead said of Henry.

“He bowled beautifully throughout the Test but I thought the whole bowling unit bowled really well together and that was one of the reasons we were so convincing.

“I also want to reiterate South Africa aren’t a bad side either,” added Stead.

“Yes, we got on the right side of it this time (but) we expect them to come back and come back strongly.”