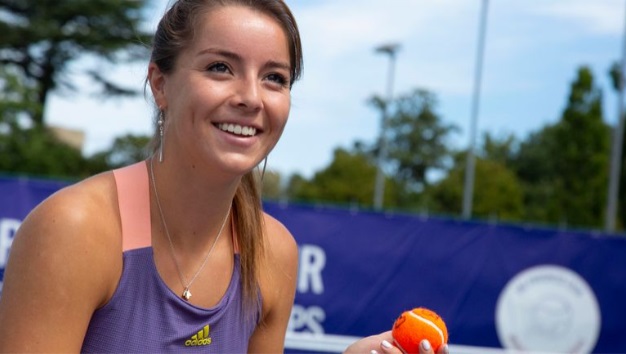 The Netherlands and Poland both needed deciding doubles wins to battle through their Billie Jean King Cup playoffs on Saturday but Britain, Italy, and Canada all enjoyed easier passages.

In Den Bosch, the Dutch were without World No. 11 Kiki Bertens for the second day because of injury and found themselves trailing China 2-1 after Wang Xiyu beat Lesley Kerkhove in Saturday’s opening singles. But Arantxa Rus beat Wang Xinyu to level the tie and then teamed up with Demi Schuurs to defeat Zhang Shuai and Zu Yifan to send the host through.

It was equally tight in Poland where the host was pushed to the brink by Brazil.

Brazil’s Carolina Meligeni Alves took the tie into a deciding double with a win over Katarzyna Kawa but the Poles prevailed 3-2 as Kawa and Magdalena Frech came back from a set down to beat Meligeni Alves and Luisa Stefani.

Kazakhstan also won a deciding rubber to see off Argentina.

Britain led 2-0 overnight against Mexico in London but Marcela Zacarias beat Heather Watson to keep alive the tie. Katie Boulter proved too strong for Giuliana Olmos though to clinch the tie for the host.

Italy beat Romania 3-1 while Canada’s teenager Leylah Annie Fernandez sealed her country’s path as she gave her side an unassailable 3-0 lead over Serbia thanks to a three-set win over Nina Stojanovic. Ukraine eased past Japan 4-0 while Anastasija Sevastova secured Latvia’s 3-1 victory over India.

The eight winners move forward to next year’s qualifying round where they will hope to reach the 2022 Billie Jean King Cup Finals. The old Fed Cup was re-branded last year and named after the American great and 12-times Grand Slam singles champion who won the inaugural tournament nearly 60 years ago.

This year’s 12-team Finals were postponed because of the pandemic and a new date has yet to be finalized.