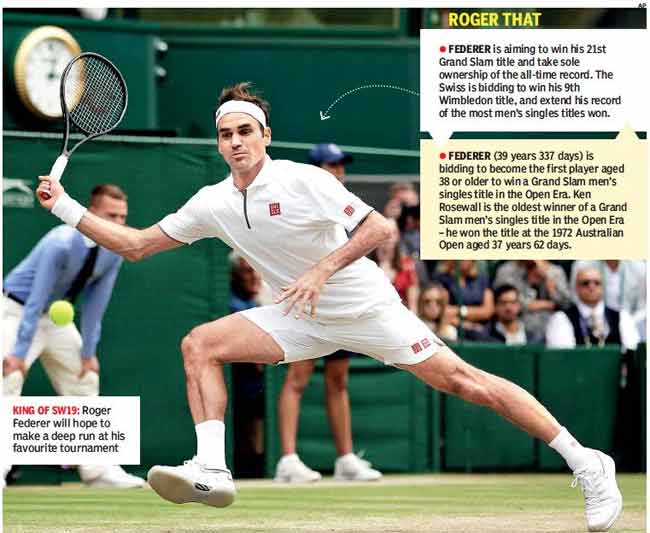 People are often put in a jam when they are asked a question that they don’t fully understand, and try to talk their way out of it as they don’t wish to reveal that they didn’t get it. However, Roger Federer had no qualms in admitting that he did not comprehend a certain English phrase while being interviewed after getting a walkover in his Wimbledon first-round match against France’s Adrian Mannarino. Federer’s honesty left the crowd at Centre Court in splits.

The presenter asked Federer if he felt it is true that “absence makes the heart fonder”, being back at Wimbledon after it was canceled last year due to the COVID-19 pandemic.

“I’m sorry, I didn’t understand it,” Federer says sheepishly, before breaking into laughter – along with the rest of the audience.

“I heard something absence and then, I don’t know, my mind went blank,” the tennis legend said.

The presenter repeats his question to which, Federer says “I don’t understand that saying”, drawing more laughter from the crowd.

“My English is not good enough,” he says.

When the presenter breaks it down in simpler terms, a beaming Federer says “Yes, there you go.”

Federer then waits for the applause to die down before adding “A good reminder that my English is not very good.”

Federer then goes on to say how it is great for all the players, fans and organizers to be back on tour, especially playing Wimbledon.

He said it is great that fans were allowed at the All England Club as “it would have been the worst to have this tournament with no fans.”

A fan-favorite at the oldest tennis tournament in the world, Federer is looking to add another title to his record eight championships this year.

He survived a scare against Mannarino, who was leading him two sets to one in their first-round match before picking up an unfortunate injury.

Federer will play another Frenchman, Richard Gasquet, in the next round.