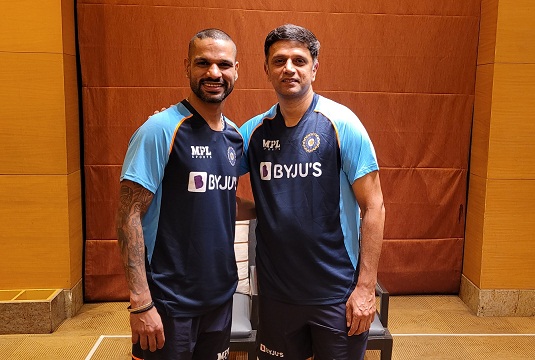 The Board of Control for Cricket in India (BCCI) on Sunday introduced fans to the captain and coach of Team India for the upcoming tour of Sri Lanka. In the post, Shikhar Dhawan and Rahul Dravid can be seen posing for a picture. India will soon travel to Sri Lanka for three One-Day Internationals (ODI) and the same number of Twenty20 Internationals (T20I). Shikhar Dhawan will lead the Indian team and former India captain Rahul Dravid will step in to coach the young side as regular skipper Virat Kohli and head coach Ravi Shastri are in England, gearing up for the upcoming five-match Test series.

The BCCI captioned the picture as “Say hello to #TeamIndia’s captain & coach for the Sri Lanka tour. We are excited. Are you?”

"Losing a match doesn't make a team bad. And see, we are continuously reaching the Semi-finals and finals, it is not an easy thing, it's Huge thing. Due to a bad match, we start criticizing that India cannot take the pressure, which is not the case." – Kapil Dev (To Sports Yaari)

India will be without their players, who are in the Test squad in England, for the Sri Lanka tour, starting next month. Team India will play a couple of intra-squad games after landing in Sri Lanka.

All the six matches will be played at R Premadasa stadium in Colombo.