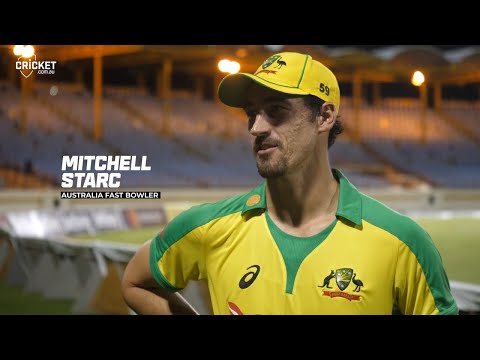 Australia’s veteran fast bowler Mitchell Starcgot a big roar during the fourth T20I against the West Indies, where his team won by four runs. Starc has defended 10 runs in the last over against one of the fiercest T20 batsman in the world — Andre Russell. The West Indies needed 11 runs to win in the last over after Riley Meredith conceded 25 runs in the 19th over of the Windies inning. Captain Aaron Finch threw the ball to Starc who had an expensive outing in the series till then as he had conceded 104 runs in the first three games taking just a single wicket.

Brilliant Final Over By Starc 🔥 pic.twitter.com/yS3Wy1eMOE

The left-armer started the over with a toe-crushing yorker and went on to frustrate the hard-hitter Russell by not giving him room to play big shots. Russell wanted to keep the strike with him, so he didn’t take the singles, and as a result, Starc got five consecutive dot balls in the final over. Russell got six off the last ball.

It all came down to Starc v Russell! 🤜🤛 #WIvAUS pic.twitter.com/jsQZrpkP3S

“Certainly, it’s been a job of mine for the majority of my white-ball career. There are days when you get it wrong, I got wrong against Russell in the past but ultimately what you need to do in T20 cricket is back your ability, back your decision,” Starc said in a video tweeted by Cricket Australia after his final-over heroics.

“If you are run-in with two thoughts on your mind, you’re almost behind the game already. If I can turn at the top of my mark, feeling like I’m going to execute what I want, it keeps me in good stead and it paid off tonight,” he added.

Batting first, Australia scored 189 with all-rounder Mitchell Marsh adding 72 and captain Finch’s 53 runs. In reply, the West Indies were going well in the second innings as Lendl Simmons scored 72, but later they fell short after the top order wickets fell.

The West Indies have already won the five-match T20I series against Australia as they are 3-1 up. This was the first win for the Australian team on their Caribbean tour this year.

The fifth and final T20I will be played on July 17 at the Daren Sammy National Cricket Stadium, St Lucia.

BCCI Officials To Leave For Oman And Dubai For T20 World Cup Preparations On Friday: Report
Vaughan reacts amid reports of Pant testing positive for Covid-19