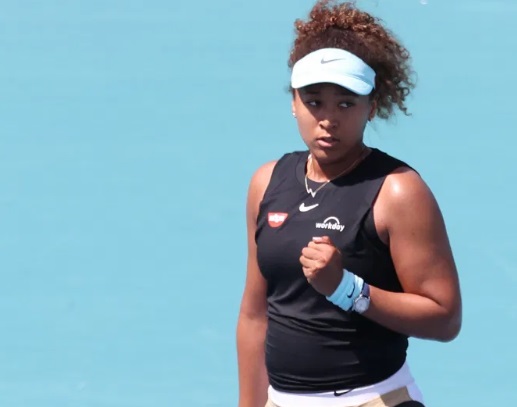 Naomi Osaka might never hit a worse shot. Not that it mattered.

The world’s No. 2-ranked woman shanked a serve that sailed over her opponent’s head, but shook off the mishit to win her 22nd match in a row Friday, beating Ajla Tomljanovic 7-6 (3), 6-4 in the second round at the Miami Open.

Serving into the sun in the final game, Osaka clunked her shot off the lip of her racket, blooping the ball past an astonished Tomljanovic.

“That was actually kind of funny when I got past my frustration,” Osaka said.

“The sun was like on top of a cloud, and it gave off this really weird glare effect. It was kind of my fault for being stubborn and not trying to catch my toss and wait it out.”

Other serves were much better, Osaka hit 13 aces. She hasn’t lost in more than a year, and her winning streak includes her fourth Grand Slam title at the Australian Open last month.

She needs only one more victory for her best showing in five appearances in Miami, where she has historically made early exits.

“I don’t think there’s too much you can read into them,” Osaka said. “I think there’s always a reason I haven’t done well here, and hopefully I’m able to do well this time.”

In men’s play, No. 3-seeded Alexander Zverev double-faulted three times on breakpoint and lost to No. 83-ranked Emil Ruusuvuori, 1-6, 6-3, 6-1. Zverev was coming off a run to the title last week in Acapulco.

Winning in straight sets were No. 6 Karolina Pliskova, No. 8 Bianca Andreescu, No. 12 Garbine Muguruza, and No. 16 Elise Mertens.

Muguruza, who won the Dubai Championships earlier this month, improved her 2021 record to 19-4 by beating wild card Xinyu Wang 6-4, 6-1.

“I was actually quite nervous because this is a tournament that I love,” Muguruza said.

“After playing well in the Middle East swing, I just wanted to keep the same energy and the same quality of tennis.”
Pliskova dropped her first service game but settled down to sweep Zheng Saisai 6-2, 6-1. Mertens was a point from trailing 4-0 but rallied past Katie Boulter 6-4, 6-1.

Miami open :Osaka acknowledged she was feeling some nerves in her first match since she lifted her fourth Grand Slam title in Melbourne
Top-seeded Medvedev toils into Miami Open fourth round.