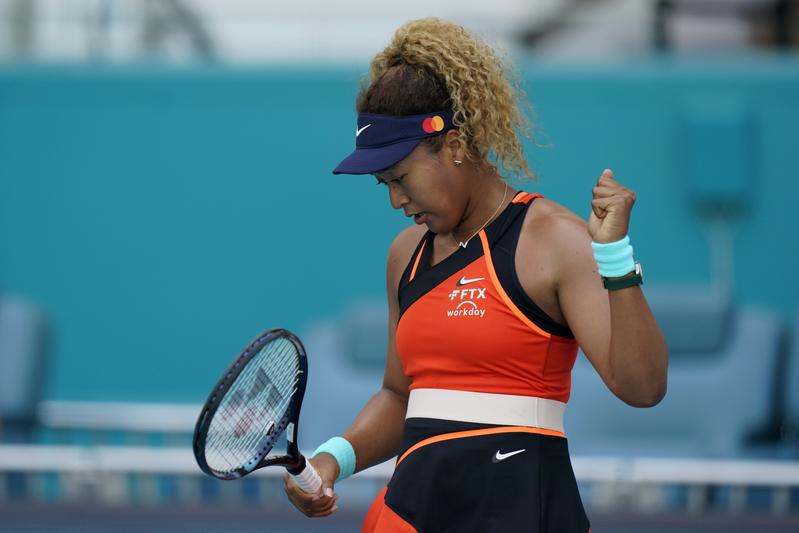 Making the quarter-finals at a tournament used to be no big deal for Naomi Osaka. It was only a shock if it didn’t happen.

Things are a bit different now.

The former world No. 1 has made it through to the quarter-finals at the Miami Open — just the second time she has managed to advance that deep in any tournament over the last year. Osaka beat Alison Riske of the U.S. 6-3, 6-4 on Monday, moving into a round-of-eight matchup with Danielle Collins.

Osaka’s only other quarter-final appearance in the last year was at an Australian Open warmup tournament in Melbourne in January. Before that, her most recent quarter-finals trip was at Miami a year ago.

“It’s really funny for me, because last year here I made it to the quarters, too,” Osaka said. “It was after I won Australia and I wasn’t that grateful. I kind of expected to win.”

Wins these days just mean more, after ongoing struggles and time away from the game to deal with her mental health. Her ranking has dipped to No. 77 — it could get somewhere around No. 30 if she wins the Miami title — and she hasn’t won a tournament since that Australian Open last year.

But her stay in Miami so far has been nothing but happiness, with three easy wins — all in straight sets — and the added benefit of a walkover victory in there as well.

“This is really one of the funnest times of my life,” Osaka said. “I’m really grateful.”

The win likely ensured that Collins is locked into the top 10 when the world rankings reset early next week. She could be as high as No. 8 depending on how far others go in the tournament.

Collins is 0-2 in previous matches against Osaka, both straight-set losses on hard courts, one in 2018, the other in 2019.

“When Naomi is at the top of her game, she’s very, very hard to beat,” Collins said.

Daria Saville also got into the quarter-finals, surviving a three-hour match to beat Lucia Bronzetti 5-7, 6-4, 7-5. Saville has climbed a staggering 500 spots in the rankings in about a month and a half; she was 627th in the world in mid-February and could make the top 100 if she wins her next match against No. 22 Belinda Bencic — a 6-2, 6-3 winner Monday over Aliaksandra Sasnovich.

“I was in a good mood today and (in a) good zone,” Swiatek said. “I was really focused. Sometimes I have these kind of moments where I don’t even know what the score is. That’s nice, because you’re just focusing on tennis and tactics and technique.”

No. 16 Jessica Pegula also advanced; unseeded Anhelina Kalinina retired after Pegula won the first set 6-0. Pegula will play No. 5 Paula Badosa, a 6-2, 6-3 winner over Linda Fruhvirtova in the quarter-finals.

In the men’s third round, Daniil Medvedev is now two wins away from reclaiming the No. 1 ranking.

The top seed in Miami beat Spain’s Pedro Martinez 6-3, 6-4. A trip to the semi-finals is all it would take for Medvedev to leapfrog Novak Djokovic — who can’t travel to the U.S. because he isn’t vaccinated against COVID-19 — and return to No. 1.

“I competed until the end,” Brooksby said.