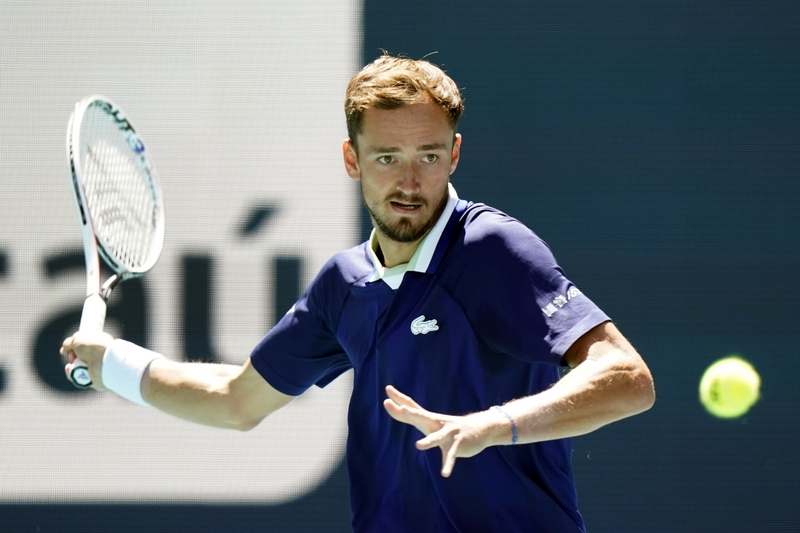 The top-seeded Medvedev opened his bid to reclaim the No. 1 ranking Saturday by topping Murray 6-4, 6-2 in the second round of the Miami Open. Medvedev never faced a break point in any of his nine service games.

He can regain the No. 1 spot by making the Miami semi-finals.

“Definitely, I have a lot of motivation to try and get it back,” Medvedev said.

Only five men in the past 18 years have held the No. 1 ranking that is currently held by Novak Djokovic. Roger Federer and Rafael Nadal are also past No. 1’s — while Medvedev and Murray are the others. Murray was No. 1 from November 2016 through August 2017, and that distinction was handed off between Djokovic, Federer and Nadal since before Medvedev got there for the first time on 28 February.

Medvedev’s stay was brief; his three-week reign ended officially on Monday when Djokovic returned to the top of the rankings. But with three more wins in Miami, Medvedev would be back on top.

“I still felt like in the rallies and stuff I could hang with him, and I didn’t feel like from the back of the court I was getting like really outplayed,” said Murray, who got into Miami on a wild card and is continuing his comeback after undergoing hip resurfacing surgery. “I’m sure some people will think otherwise.”

Murray is a two-time Miami Open winner, those victories coming at the tournament’s former home in nearby Key Biscayne. His loss meant only one past Miami men’s winner remains in the field — that being defending champion Hubert Hurkacz, the No. 8 seed who defeated Arthur Rinderknech 7-6 (5), 6-2 and moved into the third round.

Meanwhile, Naomi Osaka moved into the fourth round without ever taking the court. Osaka — the former women’s No. 1-ranked player who got straight-set wins on Wednesday and Thursday to get into Round 3 — got a walkover victory Saturday when Karolina Muchova withdrew citing a need for recovery.

“I’m sad that I cannot put up a battle against Naomi today,” Muchova wrote on Twitter. “After a long break from tennis, 2 tough matches in row have been a lot for my body and I need longer to recover.”

Muchova missed about seven months because of an abdominal injury and hadn’t played since the U.S. Open before returning in Miami. She recorded straight-set wins over Tereza Martincova and Leylah Fernandez in Miami, but neither was easy — three of the four sets went to tiebreaks and she spent nearly five hours on the court.

Osaka topped No. 13 Angelique Kerber in the second round and won’t have to face another seed until at least the quarter-finals. The earliest No. 22 seed Belinda Bencic could see one is in the semifinals; Bencic, one of only three seeds — out of a possible 16 — to make the third round on the top half of the draw, rolled past Heather Watson 6-4, 6-1.

“It depends on me, how I play, how I feel,” Bencic said. “I’m not always looking at the draw so I have no idea what’s going on.”

Another seeded third-round winner on the women’s side was Australian Open finalist Danielle Collins of the U.S. The No. 9 seed played through some neck soreness and downed Vera Zvonareva 6-1, 6-4.

A number of men’s seeds were beaten in their second-round matches Saturday, including No. 7 Felix Auger-Aliassime, No. 12 Denis Shapovalov, No. 18 Nikoloz Basilashvili, No. 23 Karen Khachanov, No. 24 Daniel Evans, No. 27 Christian Garin and No. 32 Albert Ramos-Vinolas. Sebastian Korda of the U.S. saved a match point on the way to topping Ramos-Vinolas 4-6, 7-6 (6), 6-3.

Tommy Paul of the U.S. got the upset over Khachanov, winning 6-4, 3-6, 7-6 (3). Paul improved to 14-7 on the year and will next meet No. 11 Taylor Fritz, the highest-ranked American. Fritz — coming off a win at Indian Wells, even after injuring an ankle — needed three sets to beat qualifier Mikhail Kukushkin on Saturday.

“I was a little worried about my ankle,” Fritz said. “I have been definitely kind of holding back in practice the last couple of days, kind of just went once a day, took it easy. Today it felt great, honestly. It’s getting better and better every day.”

Another American, Jenson Brooksby, had the upset over Basilashvili, 6-3, 6-1.

Other seeded men’s winners included No. 3 Stefanos Tsitsipas, No. 14 Carlos Alcaraz, No. 15 Roberto Bautista Agut, No. 21 Marin Cilic, No. 25 Alex De Minaur and No. 29 Aslan Karatsev.