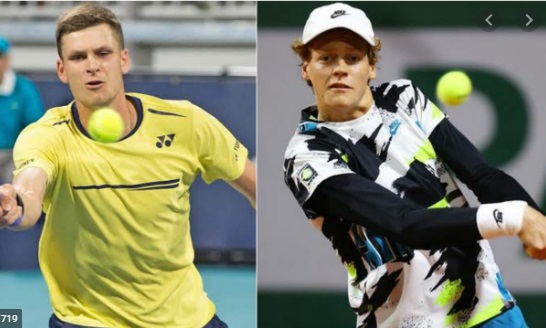 The 2021 Miami Open will crown a new Masters 1000 champion as two first-time finalists – Jannik Sinner and Hubert Hurkacz – are set to clash for the title on Sunday.

Sinner, who is now on the cusp of a top 20 debut, was the first to book his spot in the summit clash. The Italian came from a breakdown in the deciding set against 7th seeded Roberto Bautista Agut to close out the latest in a series of dramatic victories here in Miami.

Later in the evening, Hurkacz put up an incredible returning performance to take out the highest remaining seed in the draw, Andrey Rublev, in straight sets. That marked the Pole’s second top 10 wins in the Floridian city; he had also taken out the second seed Stefanos Tsitsipas at the quarterfinal stage.

Hurkacz had made a brilliant start to the season, scoring a title at the Delray Beach Open. He will be brimming with even more confidence after his terrific showings in the last few rounds here at the Miami Open.

This is set to be the first career meeting between Jannik Sinner and Hubert Hurkacz, so their current head-to-head stands at a 0-0 deadlock.

Despite never having played each other on the tour before, Jannik Sinner and Hubert Hurkacz are likely well-versed with each other’s games given that they have been partnering in doubles since the start of the season.

The two have also had similar starts to 2021 in singles. Both men scored a title in their very first tournament, and seem to have found their footing once again on the Harcourts of Miami.

Considering all of that, we are likely headed for a rather close finish in this match.

Sinner, on his part, has been especially impressive in tight match situations. The Italian youngster has stayed calm even in the face of immense pressure and has managed to close out a few close wins with finesse. He will be hopeful of doing much of the same on Sunday as well.

Hurkacz has his own strengths, especially on serve and from the front of the court. He will need to put them to good use and take as much time away from his opponent as he can.

A tight two-set win remains the best bet for the Pole because if this heads to a decider, Sinner might just find a way to prevail yet again.