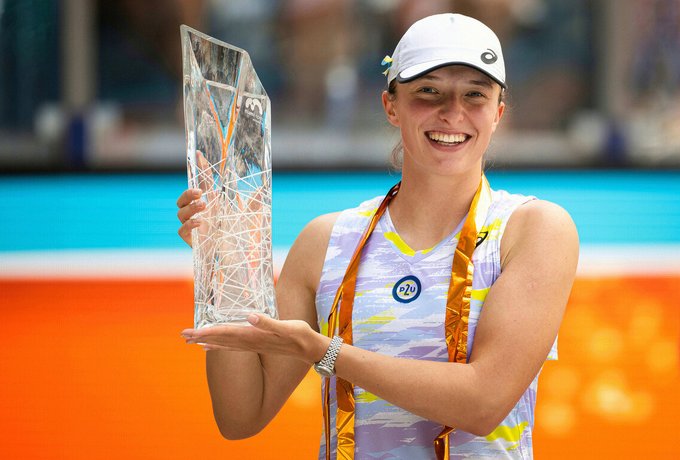 The Polish 20-year-old became only the fourth – and youngest – player to win the “Sunshine Double” of Indian Wells and Miami in the same year following Steffi Graf, Kim Cljisters and Victoria Azarenka with a 6-4, 6-0 win over Osaka.

Swiatek, who will be formally confirmed as world number one when the new WTA rankings are announced on Monday, has now won 17 straight matches, a winning streak that includes titles in Doha, Indian Wells and now Miami.

Osaka, 24, enjoyed a welcome return to form in Florida even if the four-time Grand Slam champion’s first final since the Australian Open in 2021 ended in a comprehensive defeat.

“I feel privileged to be among those players who have done this double before, I knew it would be tough playing these tournaments in a row but I took it step by step,” said Swiatek, who won her maiden Grand Slam at the French Open in 2020 as a 19-year-old and will be the favorite to win another Roland Garros crown next month on her favored surface.

“I was in the zone in the second set – that’s the easiest way for me to be dominant. I was surprised I could handle all these matches.

“I am still the same person though. My idols were like that and I don’t want the success to change me in a negative way. It gives me confidence.

Swiatek headed into a seventh career final on the back of 16 straight wins — the last player to win 16 or more in a row was Osaka, between Cincinnati in 2020 and last year’s Miami Open.

Osaka has been serving well this tournament but was broken by Swiatek to make it 3-2 in the first and began to look vulnerable.

The former French Open champion is one of the finest returners in the women’s game and even though Osaka was attempting to aggressively jump upon Swiatek’s second serve, her opponent was far more consistent and clinical overall.

The Polish player didn’t face a single break point in a match that lasted just 80 minutes.

A break of the Osaka serve right at the start of the second saw any lingering hopes for the Japanese melt in the Miami sunshine and Swiatek easily moved through the gears to land her sixth career title amid joyous scenes at Hard Rock Stadium.

For former world number one Osaka, who left Indian Wells last month in tears after being heckled by a fan during a second round defeat, this run to the final in Miami has at least given her renewed hope of returning to the top after a spell out of tennis in 2021 to deal with mental health issues.

“Iga is quite different from the other players I have played against, she is very explosive but I’m not as disappointed as I’ve been before after losses,” said Osaka, who will head to Europe a week early to prepare for the clay swing of the season. “It was a sad outcome but a fun day.

“Normally I would be crying in the locker room but I guess life experiences help.

“Only a couple days ago I was celebrating getting back into the top 50 but I don’t take things like that for granted.

“I’m a bit more humble now about the opportunities I get. I can take a lot of positives from this.”

Osaka revealed when she had dinner with Swiatek in Australia a couple of years ago, she was asked her opinion about what the future held for the up and coming Polish star.

“She said she might go to college but I said don’t do that,” smiled Osaka. “I remember thinking she was so young and this good that she should commit to playing more tournaments first.

“It’s been cool to watch her grow.”