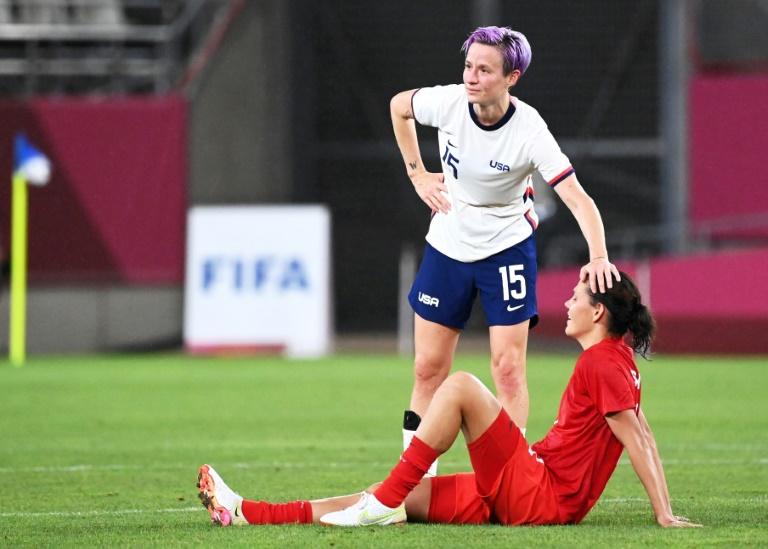 United States star Megan Rapinoe refused to be drawn on her international future after the world champions suffered a surprise 1-0 loss to Canada in the semi-finals of the Tokyo Olympics on Monday. Rapinoe, a 2012 Olympic champion and two-time World Cup winner, came on as a second-half substitute in Kashima — a role she has grown accustomed to in Japan. Asked whether Thursday’s bronze medal match would be the last for her country, she replied: “I haven’t really put too much thought into it, I’ll think about it after the tournament.”

“I was wondering how quick that question would come up,” she said with a wry smile. “You guys (the media) are trying to put me out to pasture already.

“We don’t really get the luxury of going kind of one year at a time. We have to think in these four-year blocks, and so I haven’t even thought about that.”

The US arrived in Japan fuelled by the bitter memories of a 2016 quarter-final defeat by Sweden on penalties, but instead again came up short after a first loss to Canada in two decades.

Rapinoe, now 36, was part of the US team that won gold at London 2012, where the Americans beat Canada 4-3 after extra time in the semi-finals en route to a fourth Olympic title.

The US had lost just once over 90 minutes across six previous appearances at the Olympics, but an ageing side was thumped 3-0 by Sweden in their opening game in Tokyo before being bundled out by Canada.

Rapinoe and several of her team-mates are in the twilight of their careers.

“It’s sad because these (Olympics) only come around every so often, obviously this one with the long build-up, so it’s a tough one. I think this was a little bit of a tough one to swallow,” said Rapinoe.

The 2019 Ballon d’Or winner spoke out in defence of coach Vlatko Andonovski, taking charge of the US at a major tournament for the first time.

“We’ll bounce back from this, and this will make everyone of those players in the locker room better.”

The US find themselves in the unfamiliar position of fighting for bronze against Australia, but Rapinoe insisted motivation would not be an issue.

“We don’t lose very often and so we typically bounce back pretty well,” she said. “We have a medal to compete for. We had goals of winning a gold medal but any medal is really special.

“We can’t lose sight of that, especially given the year everyone’s gone through and what it’s taken just to be here.

“I think we have a ton still to play for. I think taking home a bronze medal would be a great accomplishment for this team and I don’t think we should just pooh-pooh that away.”