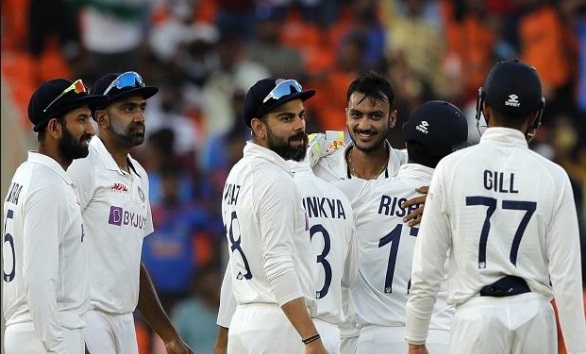 England were simply outplayed here. There were no demons in the pitch like the third Test but the England batters didn’t show good application. India dominated all the three sessions of the day. 205 is all the visitors could manage. Once again, spin did the trick for the hosts.

In response to England’s first innings score of 205 runs, India finished at 24 for one at Stumps, on Day 1 of the fourth and final Test match, at the Narendra Modi Stadium in Ahmedabad. The hosts currently have Rohit Sharma and Cheteshwar Pujara batting. The duo will be aiming to build a steady partnership on Day 2. India lost an early wicket, with James Anderson taking the wicket of Shubman Gill in the very first over. England had a poor start, losing quick wickets. Despite a half-century from Ben Stokes, the visitors bundled out for 205. Axar Patel was in top form once again, taking four wickets. Meanwhile, Ravichandran Ashwin took three wickets. Also, Mohammed Siraj registered two dismissals and Washington Sundar got the key wicket of Stokes.

The wily left-armer finished with figures of 4/68 and his senior man Ashwin picked up a three-wicket haul. England’s resistance was in flashes as Ben Stokes’ 55 and Dan Lawrence’s 46 helped the visitor move past 200 for the first time in three Tests. Skipper Joe Root, the lead act with the bat, was undone by a snorter from Mohammed Siraj who looked menacing in his brief spells.