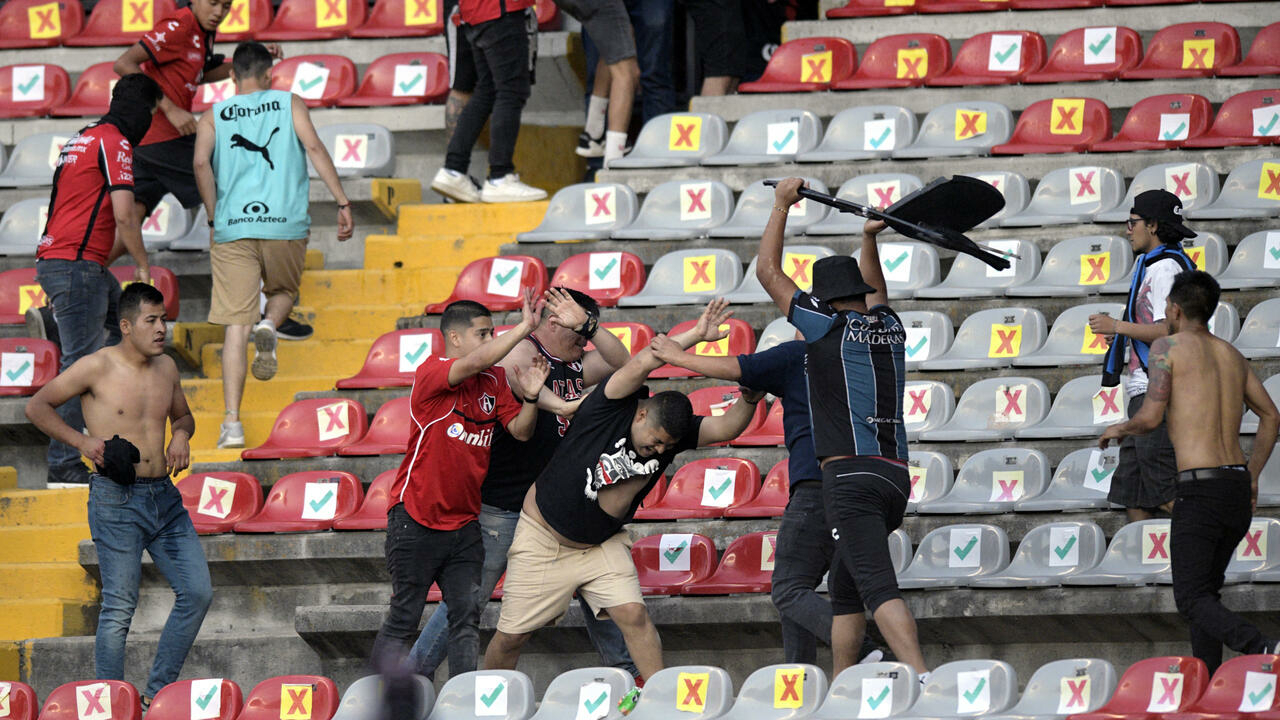 Sao Paulo, Brazil: A string of outbreaks of violence, several deadly, suggest that fan unrest in Latin American football is spiralling out of control.

Images of a mass brawl at a game in Mexico on 5 March that left 26 seriously injured and led to 14 arrests went viral and attracted added attention because the country is set to co-host the 2026 World Cup with the USA and Canada.

On Saturday, early in the second half of a Mexican league game between visiting Atlas and Querétaro FC, a riot broke out in Estadio Corregidora.

The brawl has left Mexico in mourning, triggering questions about transparency, security and accountability.https://t.co/l2jfnypSOs pic.twitter.com/Klc01uke2y

On the same evening there were savage attacks beside a stadium in Palmira, just outside the Colombian city of Cali, between America and Deportivo Cali fans.

The next day, a man was shot dead in a confrontation between fans of Atletico Mineiro and Cruzeiro in Brazil.

While academics who study the issue say that the end of coronavirus restrictions, which have been blamed for increases in violence in French and English football, are a factor, there are other underlying problems.

“There is no way to end violence in football, that should be very clear,” Heloisa Reis, a professor at the Unicamp University of Sao Paulo, told AFP.

“But it can be reduced. For that, a very comprehensive public policy is needed,” said Reis, the author of a book about the problem.

Argentina, Brazil, Colombia, Ecuador and Peru have enacted laws to quell excesses by punishing hooligans with jail or even cancelling sporting events.

Some of these initiatives replicate steps in Europe to control hooligans, such as biometric identification or video surveillance in and around stadiums.

Bad scenes at the Queretaro vs Atlas Match 🇲🇽

Football should never result in #violence.

Prayers with the victims 🙏 pic.twitter.com/yP0N9PijdJ

After the riot in Queretaro, Mexico banned travelling fans from games — a measure used in Argentina, Brazil and Colombia — but questioned by experts because, they argue, the fans still travel and the violence moves to the streets.

“The great failure of the policies adopted is that they focus exclusively on the security component,” says sociologist German Gomez, a researcher at the Colombian Association of Sports Studies. Multiple people were injured during the brawl, including two critically. AP

Reis argues the root of the problem is “toxic masculinity”.

Football matches provide an arena for competition between men to gain power over rivals, especially on their own territory, through physical force.

Reis advocates public policies focused on the education of men but she is not optimistic.

“We have lived under male domination for centuries. The male values reproduced are domination, strength, courage. Is there a prospect of ending that? There is not,” she said.

Specialists and fans perceive an increase in violence since Covid restrictions ended and fans returned to the stadiums.

“These are the consequences of such a prolonged confinement, in which people when they return to a public event have a need to break out of that confinement,” said Gomez.

In Brazil, at least nine incidents have been reported since February 12, including the shooting dead of a Palmeiras fan and the stoning of team buses, in which players were injured.