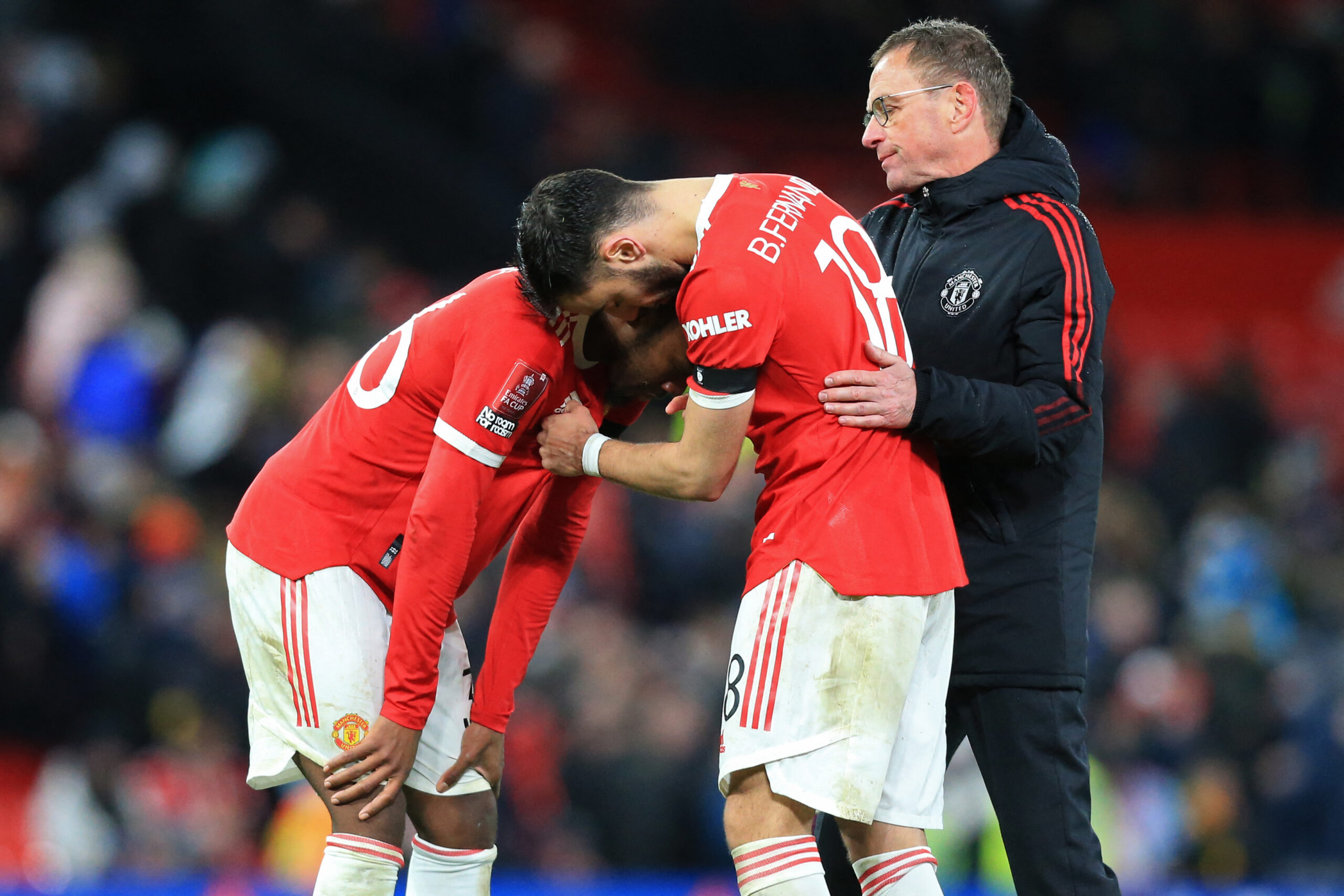 Ralf Rangnick claimed Manchester United were robbed by VAR after his side suffered a shock FA Cup exit at the hands of Championship club Middlesbrough who won 8-7 on penalties after a 1-1 draw on Friday. Rangnick’s team crashed out in the fourth round after Anthony Elanga blazed his spot-kick over the bar in a nerve-jangling shoot-out at Old Trafford. Swedish teenager Elanga was the only player from either team to miss in the shoot-out, leaving the forward holding his head in disbelief as Middlesbrough celebrated their stunning victory.

Jadon Sancho had put United ahead in the first half, but Matt Crooks grabbed a controversial equaliser after the interval to set the stage for Middlesbrough’s memorable upset.

Crooks’ goal was allowed to stand despite Duncan Watmore controlling the ball with his hand before providing the assist.

“We conceded a goal which I don’t understand why it stood. He controlled it with his hand,” Rangnick said.

“In the moment when they scored, it was clear that VAR would not allow this goal to stand.”

Even Middlesbrough boss Chris Wilder thought the goal would be ruled out, saying: “I thought straight away it was handball.

“I thought it would be chalked out and was delighted it wasn’t. The FA Cup is alive and kicking!”

Cristiano Ronaldo had missed a first half spot-kick for United, who have now lost seven of their last eight penalty shoot-outs, including last season’s Europa League final against Villarreal.

United had 30 shots in total but lacked the composure and cutting edge required to kill off supposedly inferior opponents.

“I’m incredibly disappointed,” Rangnick said. “We should have won and killed off the game in the first half.

“Crossbar, post, missed penalty and numerous chances. It should have been 2-0 or 3-0.”

United are without a major trophy in five years and their hopes of ending that drought are dwindling given their Premier League struggles and a tricky Champions League last 16 tie against Atletico Madrid.

The FA Cup embarrassment is the latest hammer blow for United at the end of a painful week that saw their England forward Mason Greenwood arrested over the alleged rape and assault of a young woman.

While still in custody, the 20-year-old was further arrested on Tuesday on suspicion of sexual assault and threats to kill.

Greenwood, who was released on bail on Wednesday, has been suspended from all football activities at United since the arrest that sent shockwaves through Old Trafford.

Wilder masterminded a shock 2-1 win on his last visit to Old Trafford with Sheffield United.

Initially, it seemed there was little chance of a repeat as Sancho hit the bar after Middlesbrough made a hash of clearing in the second minute.

Paul Pogba was making his first United start since November 2 after recovering from a thigh injury.

And the France midfielder announced his return by winning a 20th minute penalty when he ran onto Luke Shaw’s pass and Anfernee Dijksteel hauled him down.

Ronaldo dragged his spot-kick wide to the delight of 9,000 Middlesbrough fans behind the goal.

But Sancho gave United the lead in the 25th minute, taking Bruno Fernandes’ long pass in his stride with a superb first touch and cleverly working space to drill a fierce shot that deflected in off Isiah Jones.

Middlesbrough snatched their equaliser in the 64th minute when Watmore controlled a long pass with his hand as the ball bounced off his body, before lofting a pass for United academy graduate Crooks to net at the far post.

Convinced the goal should be disallowed, United surrounded referee Anthony Taylor to protest, but VAR allowed it to stand as the offence was deemed to be accidental under a new rule introduced last year.

Fernandes missed a golden opportunity to restore the lead, shooting against the post with an empty net gaping in front of him.

United had lost their poise and Elanga was destined to finish as the fall-guy.