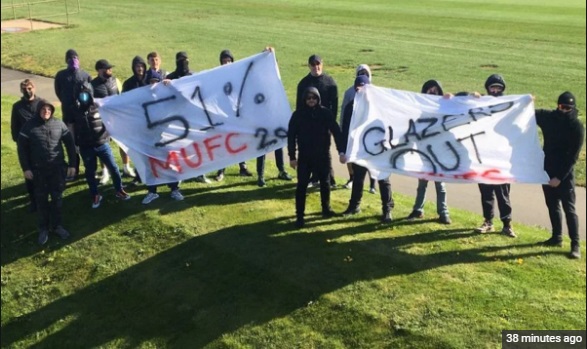 Manchester United fans breached security at their club’s training ground on Thursday as they protested against the Glazer family for the owners’ role in the failed European Super League plot. United manager Ole Gunnar Solskjaer was forced to speak to around 20 supporters after they blocked both entrances to the Carrington headquarters. The protestors unfurled banners that read “51% MUFC 20″, “We decide when you play” and “Glazer out”. The 51 percent is a reference to fans holding the majority of voting rights at a club, which is commonplace in German football. They posed for photos outside the entrance to the main building and on the first-team training pitch.

“At approximately 9 am this morning a group gained access to the club training ground,” a United statement said.

“The manager and others spoke to them. Buildings were secure and the group has now left the site.”

United has been under the American family’s ownership since they completed their controversial takeover in 2005.

The Glazers have never been liked by United fans but their reputation sank to a new low after their leading role in attempting to launch the European Super League.

United co-chairman Joel Glazer was named vice-chairman of the despised breakaway competition, which collapsed on Tuesday when all six Premier League clubs involved were forced to withdraw due to the furious public backlash.

In the fall-out, United announced executive vice-chairman Ed Woodward would leave by the end of the year, while Glazer admitted “we got it wrong” in an open letter to fans on Wednesday.

Glazer has not attended a United game in over two years and his apology speech marked his first communication with supporters in almost 16 years.

The letter read: “You made very clear your opposition to the European Super League, and we have listened. We got it wrong, and we want to show that we can put things right.

“Although the wounds are raw and I understand that it will take time for the scars to heal, I am personally committed to rebuilding trust with our fans and learning from the message you delivered with such conviction.

“We continue to believe that European football needs to become more sustainable throughout the pyramid for the long-term. However, we fully accept that the Super League was not the right way to go about it.

“In seeking to create a more stable foundation for the game, we failed to show enough respect for its deep-rooted traditions – promotion, relegation, the pyramid – and for that we are sorry.

“This is the world’s greatest football club and we apologize unreservedly for the unrest caused during these past few days.”

Solskjaer will face questions about the Super League for the first time since the collapse at his next press conference on Friday ahead of Sunday’s Premier League match at Leeds.