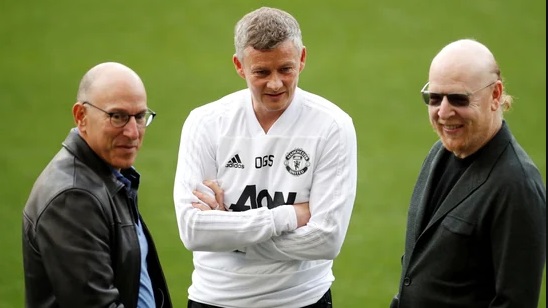 The announcement on Friday comes after fan protests at the club’s Old Trafford ground involving a pitch invasion which led to the postponement of United’s Premier League home match against Liverpool last month.Manchester United will create a fan advisory board and fan share ownership scheme as the English Premier League soccer club steps up engagement with its supporters following protests against its Glazer family owners.

The announcement on Friday comes after fan protests at the club’s Old Trafford ground involving a pitch invasion which led to the postponement of United’s Premier League home match against Liverpool last month.

United’s involvement in the failed European Super League led to the latest outbreak of fan anger, which was echoed at other top English clubs also involved in the breakaway league.

In his first fan forum appearance in more than 15 years, United co-chairman Joel Glazer vowed to not only invest heavily in facilities at Old Trafford but also make interaction with supporters a priority.

“Fans are the lifeblood of Manchester United and I am personally committed to ensuring that they are given an enhanced voice, through the creation of a Fan Advisory Board and a Fan Share Scheme,” Glazer said in a statement.

“As owners, we want exactly the same thing as the fans – a successful team and a strong club – and we want to work in partnership to achieve those objectives.”

The fan advisory board will consult with the club’s senior leadership and owners and will be made up of representatives from fan groups.

The club said it had started a direct dialogue with the Manchester United Supporters Trust (MUST) to identify a mutually beneficial fan share scheme involving a new class of shares, which will each carry the same voting rights as shares owned by the Glazer family.

In a statement, MUST described the fan share scheme as “potentially revolutionary”, but was concerned about whether the proposal would limit the number of such shares and reduce the possibility of fans acquiring a meaningful ownership stake.

“MUST is cautious about whether this Fan Share Scheme will meet their own tests before they give it approval, as despite the huge concession on voting rights that this proposal signals, as ever the devil is … in the detail,” it said in a statement.

United finished second in the Premier League behind local rivals Manchester City and have failed to win a trophy since 2017.

Glazer vowed to continue to back manager Ole Gunnar Solskjaer in the transfer market.

“Our goal is to win every competition we compete in, and we will continue to invest in our academy and in the transfer market to support the manager in an effort to meet the club’s goals,” Glazer added.