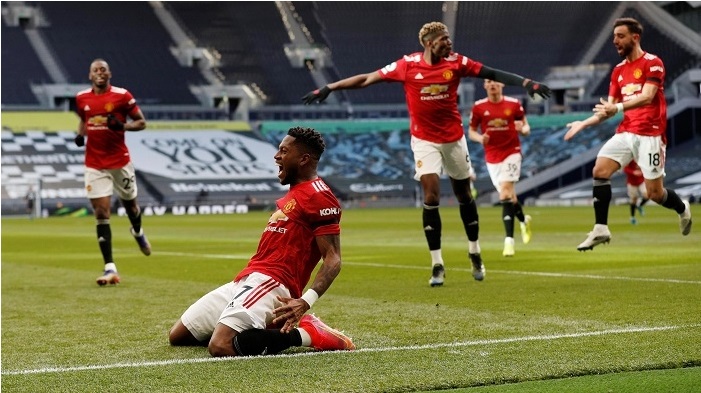 LONDON – Manchester United underlined their ‘comeback kings’ tag by recovering from a first-half deficit to beat Tottenham Hotspur 3-1 on Sunday and cement their place in the Premier League’s top four.

Victories for Chelsea and Liverpool on Saturday and West Ham United earlier on Sunday meant defeat at Tottenham might have induced some jitters at Old Trafford.

But they responded to going behind to Son Heung-min’s opener to win 3-1 with goals by Fred, Edinson Cavani and Mason Greenwood. Victory ‘narrowed’ Manchester City’s lead to 11 points but more importantly for United they are nine points above fifth-placed Chelsea with seven games remaining.

United had an opener scored by Cavani controversially disallowed after Scott McTominay was harshly adjudged to have fouled Son in the build-up — accidentally catching the South Korean in the face with a trailing hand.

“When you get the injustice and adversity, that decision (to disallow the goal) is just shocking,” said Solskjaer,

whose side have now earned an incredible 28 points from losing positions this season. “But we came together and composed ourselves.

“It was a good character we showed and we had to come back.”

West Ham maintained their audacious assault on a Champions League berth with a 3-2 home win over third-placed Leicester City, having taken a 3-0 lead for the third successive game.

Jesse Lingard’s double, taking his total since arriving on loan from Manchester United to eight, and Jarrod Bowen’s goal just after halftime made it 3-0.

But just as against Arsenal, who hit back to draw 3-3 last month, and Wolverhampton Wanderers in midweek when West Ham hung on for a 3-2 win, they gave manager David Moyes a fright.

Kelechi Iheanacho scored twice for Leicester but West Ham hung on to move back into fourth place with 55 points from 31 games, two ahead of Chelsea and three ahead of Liverpool.

“We can’t do it that way too many more times, it’s not good for the ticker!” Moyes said of his side’s nervy finale.

“We need to learn our lesson, we have been 3-0 up in the last three games and made hard work of it.”

Leicester is only a point ahead of West Ham and now looking over their shoulders, having looked nailed on for a top-four place not long ago. Their cause was not helped by the manager leaving out trio Ayoze Perez, James Maddison, and Hamza Choudhury for a breach of COVID-19 protocols.

Sheffield United’s 3-0 home defeat by Arsenal left them on the cusp of relegation. They are 18 points behind the safety zone with seven games remaining.

But Newcastle United took a massive step towards ensuring their survival as they came from a goal down to beat Burnley 2-1 on Sunday — a result that put them six points above third-from-bottom Fulham, having also played a game less.

Burnley had led through an 18th-minute goal from Czech striker Matej Vydra but Frenchman Allan Saint-Maximin came off the bench to turn the game around for Newcastle.

Two minutes after coming on Saint-Maximin set up Jacob Murphy for an equalizer, then claimed victory for Newcastle with a brilliant solo goal.

Newcastle still has to face Manchester City, Liverpool, Leicester, and West Ham but are edging towards safety.

“It is three points towards that magical figure,” said manager Steve Bruce, whose team had just two wins from their last 19 league matches. “It is a lot healthier now than it was this morning.”