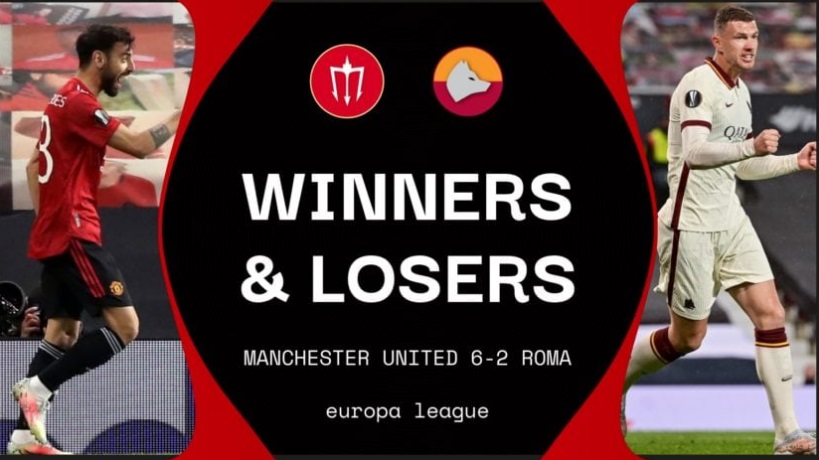 Fourteen years after getting thrashed 7-1 in the Champions League quarterfinals, Roma imploded again at the home of the English team after leading 2-1 at halftime in the first leg of the semifinals.

Manchester United handed Roma another heavy beating at Old Trafford, winning 6-2 Thursday thanks to doubles from Edinson Cavani and Bruno Fernandes to move in sight of the Europa League final.

Fourteen years after getting thrashed 7-1 in the Champions League quarterfinals, Roma imploded again at the home of the English team after leading 2-1 at halftime in the first leg of the semifinals.

United now looks set to end their struggles in the semifinals of major competitions under Ole Gunnar Solskjaer, having lost at this stage on four occasions in the past 16 months alone — including to Sevilla in last season’s Europa League.

The other semifinal is more finely poised, with Villarreal leading Arsenal 2-1 heading into next week’s second legs. Both teams finished the game with 10 men.

Roma will bemoan its misfortune with injuries, with midfielder Jordan Veretout, goalkeeper Pau Lopez and wing back Leonardo Spinazzola forced off inside the opening 37 minutes. That meant under-pressure manager Paulo Fonseca was unable to make a substitution after halftime.

Solskjaer was a member of the United side that routed Roma in 2007 and is now the manager of the first United team to score at least five goals in a semifinal match in European competition.

As a former striker, he can’t fail to have been impressed with the performance of Cavani, the 34-year-old Uruguayan who gave a clinic in how to lead the line — albeit against an obliging defense featuring former United player Chris Smalling.

It was Cavani who slipped in Fernandes to lift a finish over Lopez for United’s first goal in the ninth minute. And the striker produced an even better pass — with the outside of his right foot — to set free Greenwood for the sixth goal in the 86th.

In between, Cavani steered a shot into the top corner for the equalizer at 2-2 soon after halftime and tapped in from close range in the 64th to give United the lead after Lopez’s replacement, 37-year-old Antonio Mirante, fumbled a shot from Aaron Wan-Bissaka.

It was Cavani, too, who was fouled from behind by Smalling, after the striker had attempted a shot from Marcus Rashford’s cross, to allow Fernandes an opportunity from the spot for 4-2. The Portugal playmaker made no mistake, and now has scored 20 of 21 penalties he has taken for United since joining in January 2020

“The goals we conceded were sloppy,” Smalling said, “and really ruined what we did in the first half.”

Indeed, Roma did well to fight back from conceding early, with Lorenzo Pellegrini converting a penalty of his own after a handball from Pogba before assisting Edin Dzeko for his customary goal at Old Trafford.

That’s six in five appearances at United’s stadium, having also scored there for Wolfsburg and Manchester City.