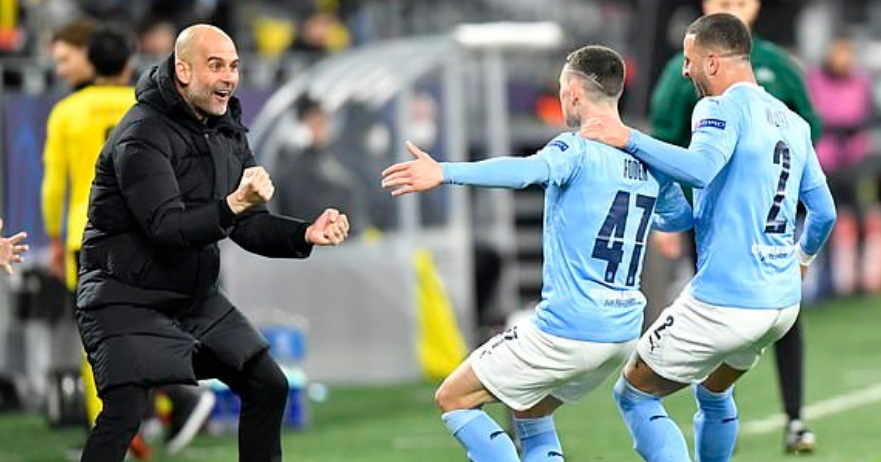 Manchester City defeated PSG 2-1 in the first leg of the 2020/21 UEFA Champions semi-finals.

At one point in the first half, it seemed like only a matter of time before the floodgates opened and Paris Saint-Germain (PSG) added a few more to their opening goal scored by Marquinhos in the 15th minute. Playing only their second ever semi-final tie in this competition, Manchester City looked overwhelmed by the might of PSG in the opening leg of the last-four tie at Parc des Princes on Wednesday evening.

Mauricio Pochettino had set his team up in just the manner that would irritate City. They thoroughly dominated the opening exchanges, with the front trio of Neymar, Kylian Mbappe, and Angel Di Maria carving open the City backline every few minutes. The city was facing difficulty dealing with PSG’s quick transitions and Pochettino’s side could very well have been ahead by a couple of more goals had they taken their chances.

Pep Guardiola started without a specialist center-forward – as things eventually panned out, he didn’t even feel the need to bring on either Sergio Aguero or Gabriel Jesus later in the game. By the last few minutes of the first half, City showed signs of improvement, as they slowed things down and tried to gain more control of the game. The center-back pairing of Ruben Dias and John Stones was key to ensuring the PSG didn’t hurt City during transitions.

Then City changed its system in the second half. Guardiola didn’t really make any change to his personnel – the only one being left-back Oleksandr Zinchenko replacing Joao Cancelo who had been booked in the first half. The Premier League leaders, who had been outwitted in midfield by the PSG trio of Idrissa Gueye, Marco Verratti, and Leandro Paredes for most of the first half, slowed their tempo in attack and were visibly more aggressive when not in possession.

The full-backs were more adventurous and the likes of Phil Foden and Riyad Mahrez, who had hogged the flanks without much success in the first half, now found space in the middle as well. City’s patient game subdued PSG’s intensity in midfield and the supply line to Neymar and Mbappe was heavily disrupted. It showed in the stats as well – compared to their nine shots in the first half, PSG managed just one shot in the second and their possession dipped from 46% in the first half to below 35%.

The city remained patient and waited for PSG to make a mistake or two. And mistakes PSG did commit, not one but three within a space of 13 minutes. The first one, in the 64th minute, was an unfortunate one. Goalkeeper Keylor Navas seemed to have done no wrong when he didn’t dive for Kevin De Bruyne’s dinked free-kick, expecting some City player to try and meet the ball. The Belgian’s mishit effort missed every player in the box but was on target and entered the back of the net.

Seven minutes later, a porous PSG wall leaked Mahrez’s free-kick to hand City the lead. Then in the 77th minute, Gueye got sent off for a horrendous tackle on Ilkay Gundogan. It was a brief implosion that the Parisians may come to regret if they don’t go on to turn things around in Manchester next week.

But more than anything else, the result showed a kind of calmness and maturity in City’s performance that wasn’t seen in Europe in the last four seasons. Guardiola’s side not only survived the early onslaught but managed to subdue one of the world’s most dangerous attacks.

“I told them (City players) ‘I understand you guys, I was a player myself. If you lose you lose but you have to try to play our game. What is our identity as a team without the ball and with the ball?’” Guardiola later told reporters of his half-time message.

“We were more aggressive in our game. In the first 45 minutes we played not to lose the ball but with no intention to break the lines,” he added. “The second half was better in every way, our football was better.”

The Champions League remains City’s biggest dream, with the club’s owners have poured in hundreds of millions into the squad in search of Europe’s biggest crown. After stumbling four times in the knockout stages, Guardiola, who had been roped in to realize this elusive dream, is two steps away from glory.

But City will still exercise some caution when they take the field in next week’s second leg. Despite being behind, Pochettino and PSG know they can still turn this around. In their last three away games in the Champions League, PSG has beaten Bayern Munich, Barcelona, and Manchester United.

“We know that anything can happen in the second leg,” said Guardiola after Wednesday’s game.