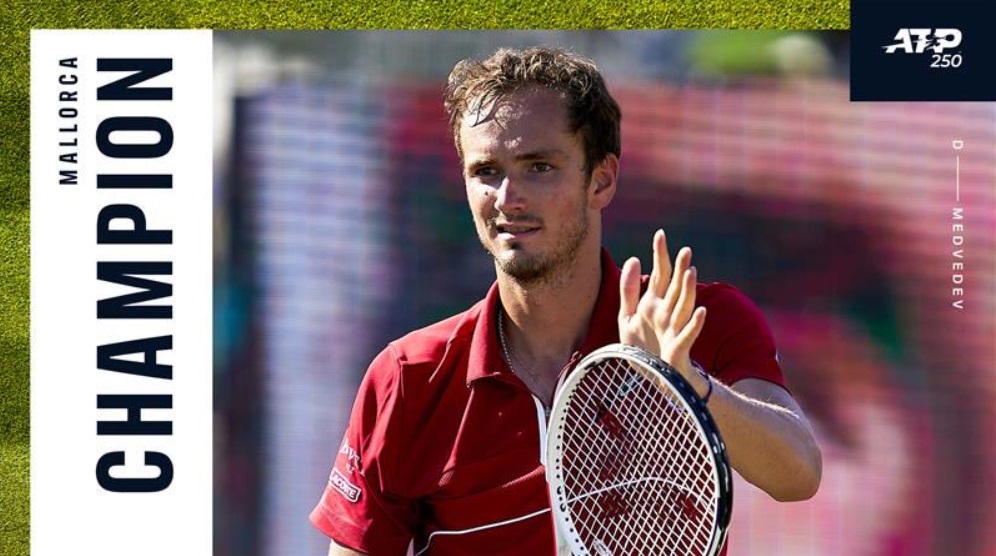 Mallorca Open 2021: Daniil Medvedev becomes champion ahead of Wimbledon: World No.2 Medvedev has defeated Sam Querrey to win Mallorca Open 2021. He won the match 6-4, 6-2 in straight sets to boost his morale ahead of the Wimbledon 2021 that begins on Monday. Medvedev will take on Jan-Lennard Struff in the opening round of the Grand Slam tournament.

Top seed Daniil Medvedev reached his first grass-court final as he came from a set behind to beat Spaniard Pablo Carreno Busta at the Mallorca Open on Friday. The Russian world number two won 3-6, 6-3, 6-2 and showed his readiness for the upcoming grass-court grand slam Wimbledon 2021. He will face American Sam Querrey.

Mallorca Open 2021- Daniil Medvedev vs Sam Querrey:  The 25-year-old’s 10 Tour-level titles have all been on hardcourts but he is showing form on grass in time for Wimbledon which starts on Monday where he will be the second seed.

A strong finish from @DaniilMedwed 💪

He's into the Mallorca final with a 3-6, 6-3, 6-2 win over Carreno Busta.#MallorcaChampionships pic.twitter.com/Kh00aFW7oQ

“I know that I can play good on grass,” Medvedev said. “Unfortunately we don’t have that many tournaments, only one ATP 500 and one Grand Slam. It’s going to be a special feeling (if I) win my first title on grass.

“Adding titles, especially on different surfaces, can help your confidence and It’s just a great thing for your career.”

Mallorca Open 2021- Daniil Medvedev vs Sam Querrey: Medvedev banged down 10 aces on a baking hot day at the Santa Ponsa venue, eventually getting the upper hand after being outplayed in the early stages by the Spaniard.

Mallorca Open 2021, Daniil Medvedev shows readiness for Wimbledon 2021: Several top players have been fine-tuning their games in Mallorca this week including Wimbledon champion Novak Djokovic who entered the doubles event.

Meanwhile, Medvedev will open his Wimbledon campaign on June 28. He will face German tennis player Jan-Lennard Struff in the first round.