Madrid and Chelsea draw 1-1 in the first leg of Champions League semifinals. 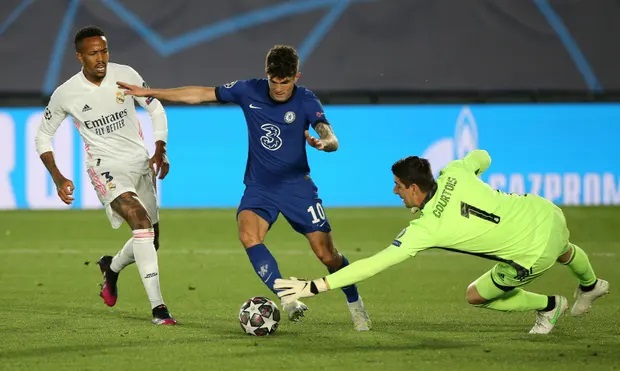 A red-hot Karim Benzema equalized for a lackluster Madrid squad on a rainy night at the Alfredo Di Stéfano Stadium in the first Champions League match since the controversial Super League folded last week amid widespread criticism.

With a dominant start and a milestone goal by Christian Pulisic, Chelsea showed its strength against Real Madrid in the Champions League semifinals.

Chelsea took control early in Tuesday’s first leg to hold the Spanish powerhouse to a 1-1 away draw, with Pulisic becoming the first U.S. international to score in the tournament’s last four. He also surpassed DaMarcus Beasley to become the top American scorer in Champions League history with five goals.

A red-hot Karim Benzema equalized for a lackluster Madrid squad on a rainy night at the Alfredo Di Stéfano Stadium in the first Champions League match since the controversial Super League folded last week amid widespread criticism.

The largely closed breakaway competition would have had Real Madrid as one of its leaders, and Chelsea also was among its founding members before dropping the idea along with the other English clubs. Madrid didn’t officially back out of the Super League but had downplayed the possibility of retaliation by UEFA in its Champions League matches. There were no refereeing controversies in Tuesday’s match.

The second leg is on May 5 in London. Manchester City hosts Paris Saint-Germain in the other semifinal on Wednesday.

Chelsea got off to a fast start and had chances to add to its lead after Pulisic opened the scoring with a nice finish in the 14th minute off a high pass by Antonio Rudiger inside the area. Pulisic calmly got past goalkeeper Thibaut Courtois before hitting the net past the Madrid defenders trying to block his shot at the goal line.

“It was a great finish, great composure,” Chelsea captain César Azpilicueta said of the 22-year-old Pulisic, who has been thriving after being marred by injuries early in the season. “He’s an amazing player, he’s a young player, he’s growing and improving. I’m very pleased with his goal because he’s an important player for the team.”

Pulisic is the second U.S. international to play in a Champions League semifinal after Beasley for PSV Eindhoven in a first-leg game against AC Milan in 2005.

Madrid evened the match on Benzema’s volley from inside the area in the 29th, and there were few significant changes either way during the rest of the game.

Benzema’s goal came a few minutes after he clipped the post with a long-range shot. The French striker controlled a loose ball with his head before turning and firing a volley into the top of the net for his 13th goal in his last 14 matches. It was Benzema’s 16th goal in his last 17 home games with Madrid.

Chelsea gave little space to Madrid and was the more dangerous team early on at the Di Stéfano in Madrid’s training complex. The hosts struggled defensively with their setup of three central defenders.

“We started the game very, very well — very aggressively, with a lot of quality,” Chelsea coach Thomas Tuchel said. “We deserved to win the first half. We had a lot of chances. We should have scored at least one more when the chances and half-chances were there.”

Not long before Pulisic’s opener, Timo Werner had his strike from in front of the goal stopped by a superb reflex save by Courtois, a former Chelsea player.

“It’s true that it was a complicated first half,” Real Madrid coach Zinedine Zidane said. “But we are still alive going into the second leg. We are happy with the result in general.”

Former Chelsea forward Eden Hazard, coming off a long injury layoff, entered the match in the second half but couldn’t find spaces to spark Madrid to victory.

Madrid, making a record 14th semifinal appearance, won three straight Champions League titles from 2016-18, before Cristiano Ronaldo left, but the 13-time champion was eliminated in the Round of 16 in the last two editions.

Chelsea won the European title in 2012 and returned to the semifinals two years later, but hadn’t been back to the last four since. Tuchel is trying to make it to a second consecutive final after a runner-up finishes with Paris Saint-Germain last season. Chelsea has only two losses since the German coach took over in January.

Not Happening! Arsenal Owner Stan Kroenke Rules Out Sale of the Club.
Man City’s patience pays off in Paris.