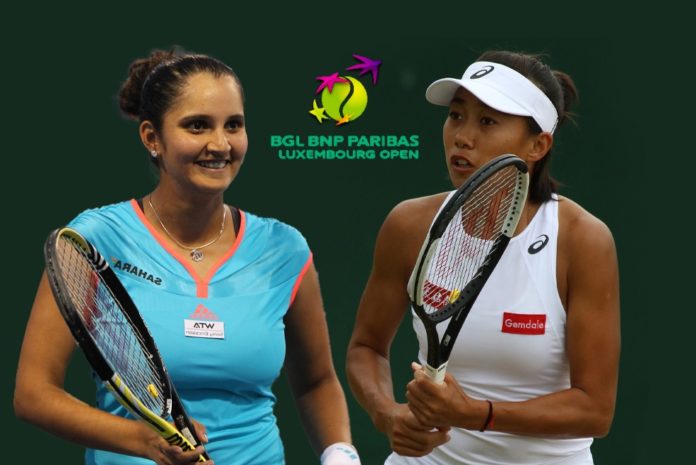 Luxembourg Open: India’s ace tennis star Sania Mirza and her partner Shuai Zhang were knocked out of the women’s doubles event of the Luxembourg Open. The Indo-Chinese pair, seeded second in the tournament, lost 3-6, 6-3, 10-8 in the quarter-finals to the unseeded Belgian team of Greet Minnen and Alison Van Uytvanck on Thursday.

The match lasted 1 hour and 11 minutes, as per olympics.com. Sania Mirza is a six-time Grand Slam doubles champion while Shuai Zhang recently won her second Grand Slam title at the 2021 US Open, partnering Australia’s Samantha Stosur. Sania Mirza and Shuai Zhang had beaten the Morderger twins — Tayisiya and Yana — in straight sets in their opening round of 16 match on Wednesday.

Luxembourg Open: The duo seemed to have picked up right from where they left off in the last match and eased past the Belgians 6-3 in the opening set, courtesy a break point in the sixth game.

Another break point followed in the first game of the second set as Sania Mirza-Shuai Zhang looked favourites to wrap up the match in straight sets. Greet Minnen and Alison Van Uytvanck, however, mounted a fantastic comeback. Riding on back-to-back break points in the second and fourth games, the Belgians roared back to win the second set and forced the decider.

The tie-breaker was a nerve-wracking affair, with both teams going toe-to-toe till the score was 7-7. The Belgians managed to break away at the crucial juncture to win the next two points.

Facing a match point, Sania Mirza and Shuai Zhang managed to save one but eventually fell 10-8.

Since her first round exit at the Tokyo Olympics, the 34-year-old Sania Mirza exited the Cincinnati Open and the US Open in their respective opening rounds. The Indian tennis player, however, made it to the Cleveland Open final last month, where Sania and her American partner Christina McHale lost in straight sets.