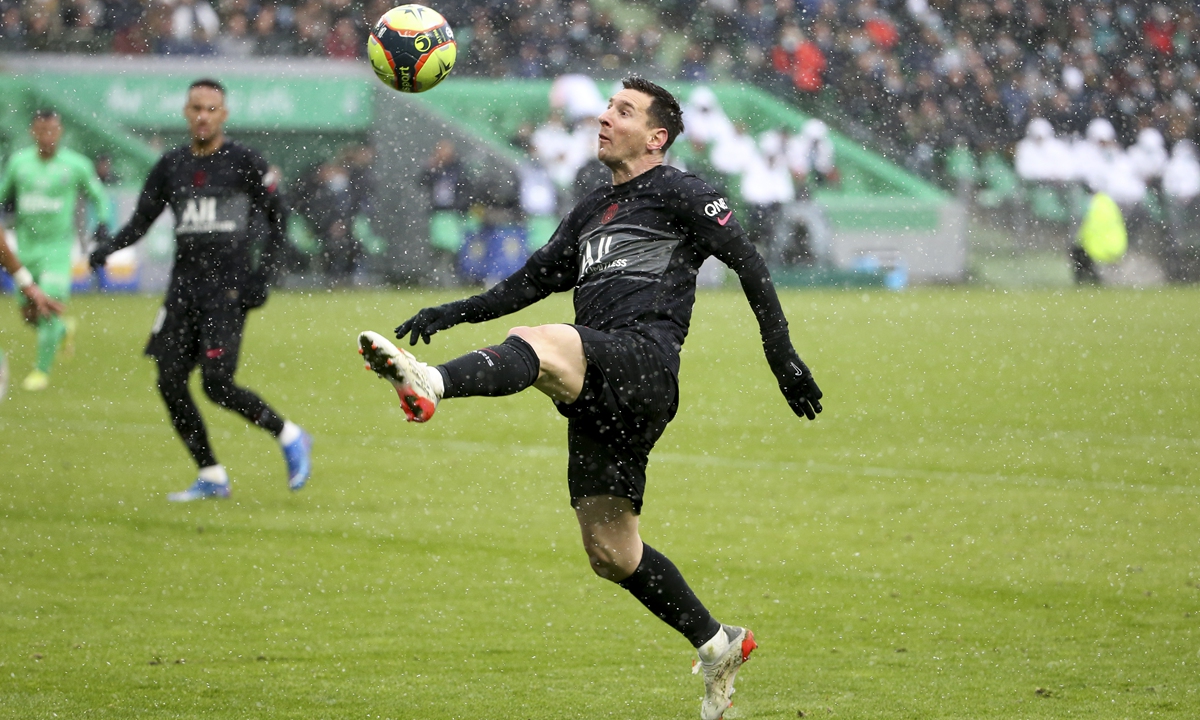 Paris: Lionel Messi showed off his latest Ballon d’Or to Paris Saint-Germain (PSG) supporters on Wednesday but the Argentinian had a quiet night as the Ligue 1 leaders were held to a 0-0 draw by Nice at the Parc des Princes.

The 34-year-old had been a pre-match doubt having reportedly picked up a stomach bug after going out to celebrate being named the best player in the world for the seventh time at a ceremony in Paris on Monday.

However, he started against Nice in a PSG side missing Neymar, who is expected to be sidelined for up to eight weeks with an ankle injury, the latest setback in the Brazilian’s time in the French capital.

Angel Di Maria and Kylian Mbappe came closest to finding the net after the break for PSG, who had a huge let-off as Kasper Dolberg hit the post for Nice in the second half when it seemed easier to score.

“We created chances and I thought we deserved the three points,” insisted PSG coach Mauricio Pochettino.

“We are improving little by little. We are top of Ligue 1 and through in the Champions League.”

Messi has still managed just one Ligue 1 goal since moving to Paris in August from Barcelona, although he has also netted three times in the Champions League.

Gianluigi Donnarumma also showed off an award pre-match, the Italian displaying the Yashin Trophy he won at the Ballon d’Or gala for being the best goalkeeper of a year in which he starred in his country’s Euro 2020 victory.

He did not have too much to do against a Nice team that defended superbly, although he did make one crucial stop from an Andy Delort header just after the half-hour mark.

“We were very, very well disciplined and I thought the draw was the right result,” said Nice coach Christophe Galtier, who led Lille to the Ligue 1 title last season at PSG’s expense.

France’s Moto GP world champion Fabio Quartararo, who was born in Nice, appeared on the pitch before the match, taking the ceremonial kick-off before shaking hands with Messi and then embracing Mbappe.

Despite the draw, Pochettino’s PSG side are 12 points clear at the top of the French table from Marseille, who climbed up to second with a 1-0 win at 10-man Nantes as Brazilian midfielder Gerson got their goal with a brilliant finish on the turn on the half-hour mark.

Marseille, who still have a game in hand following the abandonment of their recent match at Lyon, move above Rennes after the Brittany side went down 2-1 at home to defending champions Lille, Renato Sanches scoring what proved to be the winner.

Nice slip to fourth in the table, while fifth-placed Lens drew 2-2 at Clermont.

The big winners of the evening were Strasbourg, who crushed struggling Bordeaux 5-2 and sit sixth in the table, just above Monaco, 3-1 winners at Angers.

Meanwhile Lyon are languishing in mid-table after suffering a shock 2-1 defeat at home to Reims, with Hugo Ekitike scoring an injury time winner for the away side following a mistake by goalkeeper Anthony Lopes.

Lyon were forced to host the match behind closed doors as a punishment for the incidents in their last home game when Marseille’s Dimitri Payet was struck on the head by a bottle of water thrown from the crowd.