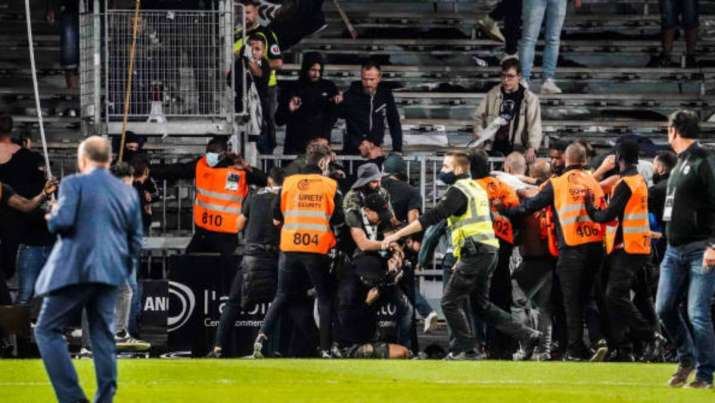 Paris: Professional football matches in France will be immediately abandoned when a player or a referee is injured by a projectile thrown from the stands, government officials said Thursday.

The move announced by the Sports, Interior and Justice ministries followed a series of violent incidents in stadiums this season in the French league. It was also agreed that the sale and carrying of plastic bottles will be banned in stadiums by next July.

French authorities decided to take urgent action after a match between Lyon and Marseille was abandoned in November. During the game, a spectator threw a bottle filled with water at Dimitri Payet and the Marseille player was hit on the head.

Government officials also said that an assessment of video protection systems in stadiums will also be carried out “with the aim of progressively raising these systems to the highest quality standards.” In addition, all professional clubs will be required to set up protective devices such as safety nets to prevent field invasions and projectiles from next season.

Violent incidents have marred domestic football since the start of the season, many of them involving Marseille.

In August, a match between Nice and Marseille was abandoned after fans threw projectiles and ran onto the field. Payet was also hit by a bottle in that game and threw it back at the supporters. Players and staff members were also involved in a brawl. Nice was subsequently deducted two points, with one point suspended.

Earlier in the season, Montpellier fans threw projectiles at Marseille players, with Valentin Rongier sustaining a cut to his lip. In September, Angers and visiting Marseille supporters ran onto the field and fought.

Marseille, which is owned by American businessman Frank McCourt, also faced a mutiny of its own fans in January when a few hundred forced their way into the club’s training complex hours before a league game.

Other clubs have been affected by crowd trouble this season.

In September, fans ran onto the field in Lens in the northern derby with Lille, and fighting broke out in the stands. During a game between Paris Saint-Germain (PSG) and Lyon, a teenager was injured by a seat thrown.

In October, a match between Saint-Etienne and Angers was delayed for about an hour because fans ran onto the field and threw flares onto the playing surface before kickoff.