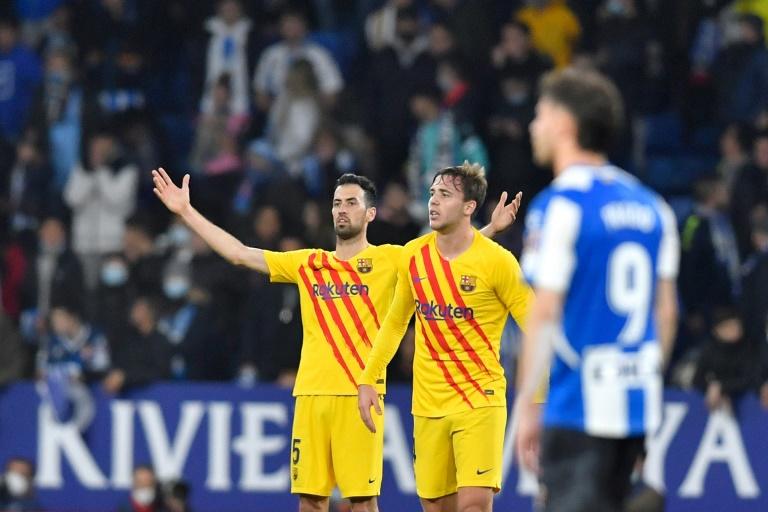 Barcelona started and finished strongly on Sunday night but sagged in between and drew 2-2 at less fashionable neighbours Espanyol to cling on to fourth place in LaLiga.

“We didn’t play brilliantly, but we played well enough to win. The bad news is that we didn’t win,” said Barcelona coach Xavi.

Pedri gave Barcelona a second minute lead but Sergi Darder levelled after 40 minutes and set up Raul de Tomas for a counter-attack goal after 64 minutes.

With time running out, Luuk de Jong headed an equaliser that saved a point for Barcelona, but they still end the weekend 15 points behind leaders Real Madrid.

They did edge past Atletico Madrid, who won on Saturday, on goal difference.

“In the end we lost more ground,” added Xavi.

“We saved a point at the end, which is insufficient, but we are still in the race for the Champions League.”

Barcelona applied brisk pressure from the start and quickly gained a reward.

Pedri leapt unmarked at the far post to meet a Jordi Alba cross and volley visiting Barca ahead.

Darder levelled for the home team with a curling right-foot shot after Barcelona gave the ball away on 40 minutes.

Barcelona became more desperate after Gavi’s 56th minute strike was ruled out because a bemused Frenkie de Jong was offside as the ball caromed off him in the build up.

Darder’s long pass caught the Barcelona defence too far forward. De Tomas controlled the ball on his chest, ran on unchecked and drilled a shot past Marc-Andre Ter Stegen.

“The first goal was a pass that we didn’t need to risk, and the second one was a mistake of ours,” said Xavi. “But football is a game of mistakes.”

“In the end they were more effective.”

As well as Luuk de Jong, Xavi threw on winter signing Pierre-Emerick Aubameyang and, with 18 minutes left, gave Ousmane Dembele, who has refused to sign a contract extension, his first appearance since 8 January.

“He can help us,” said Xavi. “He is one more for the cause and for the objectives of the season.”

Both teams started added time down to 10 after Barcelona’s Gerard Pique and Espanyol’s Nicolas Melamed tangled in the 90th minute and collected their second yellow cards.

In the sixth minute of added time, Luuk de Jong, a 62nd minute replacement, leapt to meet a cross from Adama Traore and smash a header down and into the net.

But Dani Gomez replied with his first two league goals of the season, either side of half time for Levante.

Fekir quelled the resistance with a 49th-minute free kick for the sixth goal in a frantic 39 minutes.

Real Sociedad climbed to sixth as captain Mikel Oyarzabal converted a penalty and Rafael Alcantara added a second as they beat visiting Granada 2-0.

On Saturday, leaders Real Madrid were held to a goalless draw at Villarreal.

That meant Sevilla, who won 2-0 at home to Elche on Friday, cut the lead to four points

Atletico Madrid were involved in an uncharacteristic festival of goals as they beat Getafe 4-3.