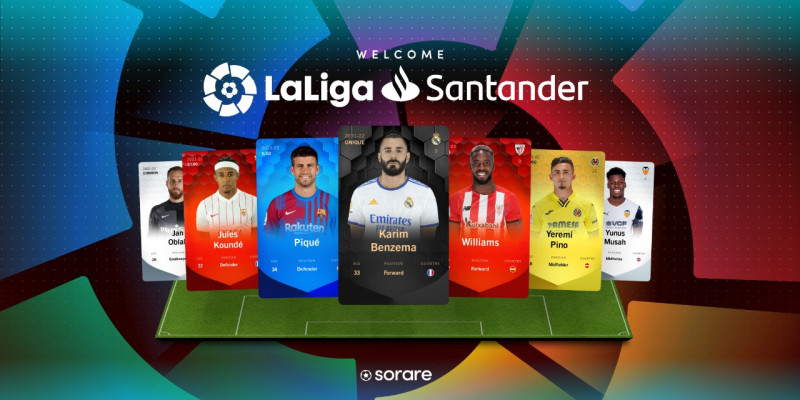 The Spanish league is joining the blockchain world by launching officially licensed digital cards of players to be sold and traded online.

The league on Thursday announced a deal with fantasy football platform Sorare to launch the cards based on non-fungible tokens, known as NFTs.

Fans, collectors and fantasy players will be able to trade and play with the digital cards of all of the league’s players, generating a new revenue stream for the clubs and giving buyers the opportunity to make money with the digital assets.

The cards’ value are determined by the market’s supply and demand, and ultimately by the players’ performances and actions.

The Spanish league is the first of the top five football leagues to sign a major NFT partnership, according to Sorare, which has Griezmann as an investor and Gerard Pique as an strategic adviser.

“We are always looking for innovative ways to offer our fans new and exciting experiences and to broaden the appeal of our competition,” Spanish league president Javier Tebas said, adding that the partnership “enables us to reach new audiences globally and gives existing fans additional ways they can get involved with the players and the clubs they love.”

The Spanish league, which recently lost Neymar, Ronaldo and Lionel Messi, has been trying to cut into the global dominance of the Premier League.

The NFTs have been increasingly used in the arts and collecting world as they effectively provide certificates of authenticity to digital items thanks to the blockchain technology, which generates “blocks” of information or transactions that are secure and transparent.

The transactions are stored on a network of computers around the world without the need of a centralised party or authority to control the data. The information can’t be altered, and the blocks are “chained” together using cryptography to form a protected and public digital ledger.

Barcelona last year launched virtual “fan tokens” to raise money and increase fan engagement, generating 1.2 million euros ($1.4 million) in less than two hours after they were put on sale. The cryptocurrency-based fan tokens give fans exclusive voting rights in club-specific polls and can give them a chance to win rewards that could include watching games as VIP guests or meeting with players.

Portuguese club Benfica two years ago was a pioneer in allowing the use of cryptocurrencies for the purchase of tickets and merchandising. Some clubs also resorted to blockchain to track the authenticity of some of their official products.