LaLiga: How Valencia vs Real Madrid became one of the biggest rivalries in Spain 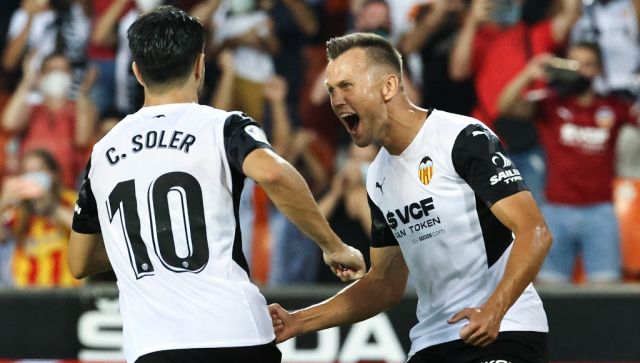 Valencia host Real Madrid on Sunday at the Mestalla with both teams on 10 points and chance to go clear at the top of LaLiga standings. The meeting between José Bordalás’s men and Carlo Ancelotti’s side is the first ‘real’ test for Valencia who have made a surprisingly strong start.

Real Madrid vs Valencia is more often than not one of the standout games of each LaLiga season. The historic rivalry between Spain’s first and third-biggest cities has always been intense, both on and off the pitch.

Both clubs have two of the biggest and most iconic stadiums in Spain, and Los Che and Los Blancos fans always see this as a ‘must win’ three points – especially since Pedrag Mijatovic joined Real Madrid in 1996 after three successful seasons at Valencia during which he became a club icon and one of the leading players in Europe.

That transfer created a wedge between two historic clubs. This was the origin of the modern rivalry of the past quarter of a century, one of the biggest rivalries in Spain today which throws up unpredictability and drama at every turn.

The Mijatovic transfer was not the only exchange of players between the two clubs, though none created quite as much tension in Spanish football. Many historic players have donned the white shirts of both these sides over the years.

Footballers who played for both teams Going back as far as 1930s Spain international Simon Lecue who won the 1936 Copa del Rey with Madrid and 1943/44 LaLiga title with Valencia. Players to have lifted the LaLiga trophy with one or both teams include Quique Sanchez Flores (who moved from Valencia to Madrid in 1994) – who is today better known for his successful managerial stints with Valencia and Atletico Madrid – and Santi Cañizares, who went the other way in 1998.

Madrid legend Alfredo Di Stefano is one of the few men to have also coached both sides, following up his eight LaLiga trophies at the Bernabeu by winning the 1970/71 title in his first season in the dugout at Mestalla.

In the current squads of both Ancelotti and Bordalás we find three footballers who played for both teams. One of them is Denis Cheryshev, a graduate of Real Madrid’s La Fabrica youth academy who made his LaLiga debut for Los Blancos in a 1-0 victory against Granada CF in September 2015. The Russia international has also represented Sevilla and Villarreal during his time in LaLiga, although it is at Valencia where he has definitely put down roots: this is his fifth season at Mestalla.

Then there’s Isco, who joined Valencia’s youth system aged 14 in 2006 and quickly moved through the ranks as a teenager to become a big star for the club’s Valencia Mestalla youth team. In 2010/11 he helped Valencia Mestalla to promotion to second division. Isco’s senior LaLiga debut for Valencia senior team came in November 2010 at the age of just 18 when he came off the bench in a 2-0 win over Getafe. The Andalusian had a stint at hometown club Malaga before landing at the Bernabeu in 2013.

And finally there is Hugo Duro, a 21-year-old striker from Madrid who has just arrived at Valencia on loan from Getafe. Last season he was on loan to Real Madrid’s reserve side, but then senior side coach Zinedine Zidane brought him into the first team after an impressive showing for the reserves. Current Valencia coach Bordalás knows him well, of course, from his time at Getafe and has brought him in for this season.

Here are five of the most entertaining and significant games between Madrid and Valencia going back through the years.

The very first LaLiga meeting between these two clubs took place on Christmas Day 1932, with Valencia having been promoted to the top flight for the first time the previous summer.

A Real Madrid team containing early stars including legendary shot stopper Ricardo Zamora – who would give his name to LaLiga’s best goalkeeper prize – were much too strong in the game played at their Chamartin stadium, coming out on top thanks to goals from Juan Hilario, Manuel Olivares, Luis Reguero and Eugenio Hilario. Madrid won their first LaLiga title that season, with Olivares ending up overall top scorer.

An interesting point: both coaches that day were Englishmen: Robert Firth for Real Madrid and Randolph Galloway for Valencia.

Valencia soon established themselves in LaLiga’s top flight and achieved a hugely significant victory away at Real Madrid in April 1947, with the 4-2 on the penultimate weekend of the season still Los Che’s biggest winning away in the fixture.

A hat-trick from striker Vicente Morera and another from Silvestre Igoa was too much for Madrid, who replied through their own legendary names Luis Molowny and Prudencio ‘Pruden’ Sanchez.

Just a week later Valencia moved above Athletic Club on goal difference to lift the LaLiga trophy for a third time in five seasons; it was the team’s first golden age.

The opening day of the 1970/71 season was a memorable occasion, with Madrid legend Alfredo Di Stefano returning to the Bernabeu in what was the Argentine’s first game as Valencia coach.

Di Stefano had won five European Cups and a whopping eight LaLiga titles during his 11 seasons as a player at Madrid. After leaving the club he returned to his home country of Argentina to coach Boca Juniors but was now back at the Bernabeu in the opposition dugout.

In what would be a disappointing hero’s return, Di Stefano’s Valencia were beaten 2-0 by Valencia with both goals scored by his former teammate Pirri. But Valencia soon clicked and started to climb the table, winning the reverse fixture 1-0 in January before ending the season as champions.

January 2016 brought an absolute thriller at Mestalla in what was the first game after 2015/16’s winter break. Rafa Benitez’s Real Madrid went ahead early through a superb Karim Benzema goal but ex-Bernabeu youth teamer Dani Parejo rolled in a penalty just before half-time for 1-1.

The second half continued to ebb and flow, and soon after Cristiano Ronaldo was denied a penalty claim, visiting midfielder Mateo Kovacic was red carded for a high tackle on Valencia Joao Cancelo with 22 minutes remaining. Gareth Bale seemed to have won the three points for Madrid’s 10 men when he headed in Toni Kroos’ late free-kick but Gary Neville’s Valencia were level within a minute when Rodrigo Moreno nodded down for Paco Alcacer to coolly head home.

Another former Blancos youth teamer Alvaro Negredo could have won it for Valencia in added time, but Madrid goalkeeper Keylor Navas denied him. An absolute thriller that both sides felt they could, and should, have won. Real Madrid and Valencia played out a 2-2 draw in the 2017-18 LaLiga season. Image: LaLiga

One of the most recent meeting of these two sides at the Bernabeu was also a cracker, with the game coming in Real Madrid’s first game in front of their own fans after winning the 2016/17 LaLiga title.

The game would confirm Marcelino’s Valencia as serious LaLiga title challengers and also as a breakout game for Real Madrid’s Marco Asensio, cementing his status as one of Spain’s most exciting young talents in years.

The home side went ahead on 10 minutes through Asensio’s long range screamer, but Valencia were level eight minutes later when young midfielder Carlos Soler arrived unmarked six yards out to finish a neat team move.

After Benzema and Bale had missing chances for Madrid, Che debutant Geoffrey Kondogbia put his side 2-1 up from the edge of the box. With the Bernabeu crowd getting anxious, Asensio equalised with seven minutes left with a superb 20-yard free kick. Zidane’s side almost won it at the death only to see visiting goalkeeper Neto acrobatically push Benzema’s header onto the post.