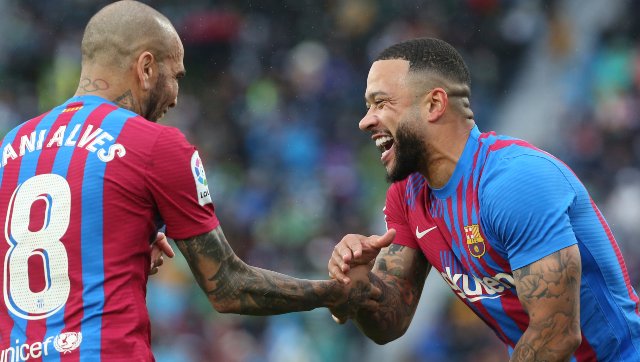 Sunday’s Clasico — contest between Real Madrid and Barcelona — won’t be deciding which way LaLiga title race goes but it is still a decisive contest between two of Spain’s biggest clubs.

For Barcelona, it is an opportunity for manager Xavi Hernandez to highlight how well, and how quickly, the project is taking shape. And for Real Madrid, a win could extend their lead at the top to 13 points if second place Sevilla don’t beat Real Sociedad. Such a margin would all but solidify Madrid’s title bid and allow them to focus on the Champions League.

No Benzema for Real Madrid

Real Madrid come into El Clasico with a 10-point difference over Sevilla and a mammoth 15 points over Barcelona. A fixture that always, always mattered is not crucial in terms of the league but pivotal for both clubs to display their credentials to the rest.

Real Madrid are not given much of a chance that they’d be able to beat Chelsea in the Champions League quarter-finals despite coming from two goals down to get the better of Paris Saint-Germain (PSG) in dramatic fashion last week. Madrid continued their momentum by beating Real Mallorca 3-0 on Monday but lost Karim Benzema in the process.

A calf injury has forced one of Real Madrid’s most important players since Cristiano Ronaldo’s exit to miss the Clasico. “We never take risks with him,” said manager Carlo Ancelotti. “He still has some pain. It’s a small injury, but it prevents him from training and playing,” he added.

“We will have two weeks to prepare him for the end of the season, where he will be very important, as always. He’s always come back from little glitches like this, and he’s always made a difference.”

Against Mallorca, Benzema bagged a brace to tick his goals tally to 413 goals and become France’s highest goalscorer overtaking Thierry Henry. The Frenchman has been in pulsating form with 22 league goals and scored a 17 minute hat-trick against PSG to turn the tie around.

The crucial question for Ancelotti will be who slots in now that Benzema is injured? Vinicius Junior, with 14 goals, is the second-highest league scorer for Madrid and is an obvious inclusion. Ancelotti has plenty of options to fill in for Benzema: Rodrygo and Marco Asensio have played most this season, but the Italian coach could also recall Mariano Diaz, Luka Jovic, Eden Hazard or Gareth Bale.

Asensio as a “false nine” and having bullet train in Federico Valverde make romping runs would be a more probable option.

Barcelona on the surge

The last time these two met, Barcelona — without Lionel Messi as a squad member — were beaten 2-1 at home and angry fans banged on then coach Ronald Koeman’s car urging him to resign. Fast forward five months and there’s a new sheriff in town with a new team, renewed personality and results have started to show.

In that loss in October, Ansu Fati and Memphis Depay started in attack with Philippe Coutinho and Sergio Agüero coming off the bench. In an impressive overhaul and upgrade in the January transfer window, Barcelona brought in Pierre-Emerick Aubameyang from Arsenal, Ferran Torres from Manchester City and Adama Traoré from Wolves. Dani Alves, 38, has returned to the club and been absolutely crucial in creating chances. Pedri and Ousmane Dembele are also providing the spark to Barcelona’s attack.

The impact is there to see. Before January, Barcelona had just 32 goals in 21 league games. In contrast, they’ve scored 20 goals in last six games. Against Osasuna, Riqui Puig found the net and became the 22nd different player to score for Barca in the league this season. Never have so many different players scored for a club in the same season in the Spanish top division.

Xavi recognises this as the opportunity to further emphasise how much the team has grown. “We have grown as a team since I arrived but it doesn’t mean anything, it’s a Clasico and we have to show our personality,” Xavi said.

“It is a chance to show we are in a good moment because we have had good results but tomorrow is another litmus test, to prove that against another big team, we can play and impose our game.”

Xavi added: “Otherwise I know the media and they will say the improvement has not been seen in the most important game of the season.”

For Barcelona, the big resurgence has come with Aubameyang’s arrival. Benched at Arsenal, the Gabon international joined as a free agent and took a pay cut given the club’s financial situation.

“The truth is, I kind of expected this because I have been working hard and wanted to make a good start (at Barcelona),” Aubameyang, who has scored seven goals in just 10 appearances, said.

“Coach already knew what I could do when I arrived and we have worked hard on the pressure that I must put on defenders (to recover the ball) and knowing how to play in tight spaces that is characteristic of this team,” Auba said.

— Barcelona haven’t beaten Real Madrid in LaLiga since 2019. That is five straight wins for Los Blancos in all competitions. The last team to dominate for so long was Pep Guardiola’s Barca which won also won five in a row between 2008 and 2010.

— Thibaut Courtois, one of the most important Real Madrid players this season, has the second highest save percentage in LaLiga. With 78.4 per cent, he’s only behind Sevilla’s Bono (80 per cent).

— New signings have made an impression already at Barca. Aubameyang has five league goals, Torres has three and assisted two. Alves, a legend at the club, and Traore also have two assists.

Barcelona are on a four-game winning streak and are unbeaten in 12 games. Since Xavi’s arrival, Barcelona have progressed from ninth to third in LaLiga and could well finish ahead of Sevilla in second.

Real Madrid, meanwhile, have won five straight in all competitions with their last defeat coming to PSG in the first leg of the Champions League Round of 16. In the league, Real have been beaten just twice this season — by Espanyol and Getafe.