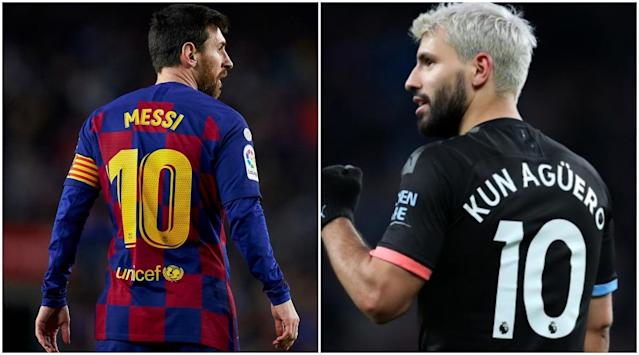 La Liga started off to an electrifying start with FC Barcelona and Real Madrid both scoring four goals against their opposition, imposing dominance right from the start. While the Madridistas go into the season without Sergio Ramos since 2005, FC Barcelona head into the season sans Lionel Messi for the first time in 17 years. However, the show must go on. Barcelona brought in Sergio Aguero in June after running down his contract with Manchester City and the 33-year-old striker was quite upset when Messi left the club as his fellow Argentine was the sole reason for him to join the Catalans.

Other than the mental state, Aguero also picked up a calf injury during training and will be out of action till late October. The Argentine striker has revealed on his Instagram that the forward will be donning the No. 19 jersey, paying tribute to Messi, who had the No. 19 jerseys before taking over No. 10 from Ronaldinho at the time.

Barcelona is yet to release the new jersey numbers for a few more players who joined in this summer. The former Manchester City player was pipped to don the No. 10 as the striker had worn the number at City. Even long-serving defender Gerard Pique had told Aguero to take over the No. 10 jersey number after Messi’s departure.

It is speculated at the present moment that Aguero is unhappy with Messi’s departure and is considering switching clubs. La Liga TV host Phil Kitromilides had told Spanish Football Podcast that the Argentine is considering leaving La Liga and head to the United States to play in the Major Soccer League (MLS).

However, as the rumors grow stronger, Brazilian creative mid-fielder Philippe Coutinho, who did not play for FC Barcelona last year, is now in coach Ronald Koeman’s strong books and is in contention to don the No. 10 jersey. The Blaugranas have offered Coutinho the legendary number. While fans beg the club not to give the auspicious number to any player just yet, it all comes down to Coutinho making the decision.

Striker Memphis Depay has been given the No. 9 number, which was donned by former Barcelona striker Luis Suarez. Eric Garcia will don the number 24 for FC Barcelona.