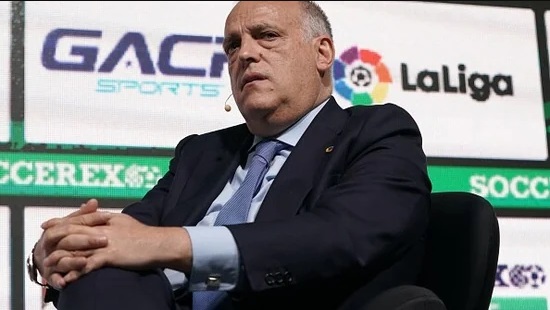 Javier Tebas, the president of Spain’s La Liga, slammed world football governing body FIFA and its chief Gianni Infantino for allegedly going against the interests of European football in events leading to the creation of the European Super League (ESL) last month.

Javier Tebas, the president of Spain’s La Liga, slammed world football governing body FIFA and its chief Gianni Infantino for allegedly going against the interests of European football in events leading to the creation of the European Super League (ESL) last month. The ESL collapsed two days after its announcement by 12 founding clubs after nine members withdrew following widespread public backlash and pressure from football authorities.

Speaking at the Club Advisory Platform of the European Leagues, hosted by La Liga in Madrid on Thursday that also included representatives from UEFA, Premier League, Serie A and supporter groups, Tebas questioned Infantino’s loyalty to football while referring to media reports about discussions between representatives of FIFA and Super League clubs prior to the creation of the ESL.

“The (FIFA) president can talk to whoever he wants and be with whoever he wants to be. What we are talking about is the football institutions and his loyalty,” Tebas said of the alleged meetings. “If he was shown a format of a closed Super League, the first thing he should have done after the meeting was to ring the president of UEFA and the leagues that would have been affected by it,” he added.

Tebas also took aim at FIFA’s Club World Cup expansion and it conducting a feasibility study into a proposal made by Saudi Arabia to hold the FIFA World Cup every two years. “These are studies that have an objective — we know what that is,” he said, indicating a view that domestic and continental competitions in Europe will be undermined by these projects.

“We cannot move towards what they are talking about,” he added. “It (the threat to football in Europe) hasn’t finished with the failure of the Super League.”

Speaking about UEFA potentially sanctioning the three remaining Super League clubs – Real Madrid, Barcelona and Juventus – by banning them for a limited period from the Champions League, Tebas said Europe’s premier club competition will remain unaffected in the absence of these clubs.

UEFA president Alexander Ceferin too continued his attack on the Super League’s founding clubs. “The irony of the Super League’s failed attempt is that they aspired to reach greater heights by destroying the base they were on. They don’t understand what it means to be part of the world of football,” he said over a video message.

Richard Masters, CEO of England’s Premier League, said governance of European football needed “rebalancing”. “We need to look at the governance model within European football because it needs rebalancing in my view. It means that in the future when we talk about all these really important things and the solutions we need, all the people in this room should have a stronger voice. So that’s leagues, the wider group of clubs and also fans have a voice in the future of the game,” he said.