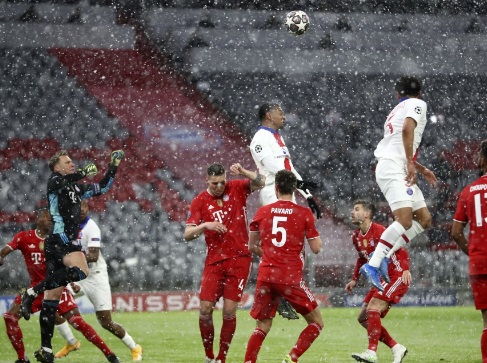 Munich: Paris Saint Germain defeated defending champions Bayern Munich 3-2 in the first leg of their Champions League quarterfinal on Tuesday. Kylian Mbappe scored once in either half of what was the first meeting between the two teams since Bayern beat PSG in the final of the competition last year. Also Read – Porto vs Chelsea: Mount And Chilwell Help Blues to 2-0 Win in Champions League

Mbappe scored as early as the third minute of the contest with Neymar providing the assist as PSG took the lead 1-0. Julian Draxler then appeared to have doubled their lead in the 12th minute but it was ruled out due to Mbappe being offside in the build-up. Also Read – Manchester City vs Borussia Dortmund: Foden Late Strike Hands Guardiola’s Men 2-1 Win in UCL Quarterfinal

However, the second goal came soon enough when Marquinhos guided the ball into the net after yet another assist from Neymar in the 28th minute. Former PSG striker Eric Maxim Choupo-Moting then pulled one back for Bayern in the 37th minute but the visitors went into the break with a 2-1 lead. Also, Read – Real Madrid vs Liverpool: Vinicius Junior Strikes Twice as Los Blancos Win 3-1 in Champions League Quarterfinal

At the hour mark, Thomas Muller headed in the equalizer but Mbappe produced a brilliant solo effort to restore his team’s one-goal advantage, handing them a vital win in the away fixture. Bayern now has their task cut out in the second leg when they travel to Paris for the second leg of the tie.

PSG manager Mauricio Pochettino was happy with the show his team put up and expects them to put up a better show than what they did against Barcelona in the second leg of their last-16 clash. After crushing Barca 4-1 at Camp Nou, PSG held them to a 1-1 draw at home.

“I am happy with the result, with the attitude of the team which found itself in difficult situations against the best team in Europe,” Pochettino told RMC Sport after the match. “We must congratulate the players for their sense of sacrifice. We are trying to repeat this kind of performance.”

“There were a lot of sacrifices tonight, but we still have one game, 90 minutes to play. The first leg is favorable but the return will be difficult as we know. It’s a totally different result from the first leg against Barca, the advantage there is as small as possible. We hope that our performance in the return will be better than against Barcelona, that’s our desire,” he added.