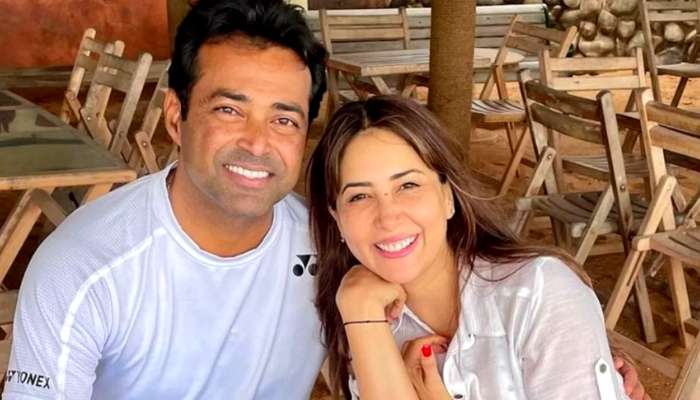 Kim Sharma can be seen facing the camera while Leander looks at her lovingly.  She added a ‘nazar’ amulet emoji and a pair kissing emoji to the shot.

Check out this romantic picture here…

When Kim Sharma and Leander Paes were sighted vacationing together, relationship rumours began to circulate. In July this year, the couple went on vacation to Goa. They’ve made a lot of appearances together since then.

Paes, who has represented India in record seven Olympic Games – between 1992 and 2016 – was rumoured to be dating Bollywood actor Kim Sharma. Social media was abuzz when cozy pictures of Paes and Kim emerged from a Goa restaurant. The Indian doubles specialist will not be heading to Tokyo Olympics this year as he officially retired from tennis after the end of 2020.

A restaurant-bar in Goa outed Leander and Kim as dating. Pictures shared by ‘Pousada By The Beach’ showed the tennis champion and actor enjoying a meal together. Another picture, also shared by the restaurant on its Instagram account, showed the two. The post was captioned, “Biscuit & Chai hosting Leander Paes and Kim Sharma at Pousada by the Beach.”

Paes and Kim have both been in past relationships. Paes was previously married to Rhea Pillai also rumoured to be dating Bollywood actress Mahima Chaudhary in the past, while Kim Sharma was most recently in a relationship with Harshvardhan Rane.