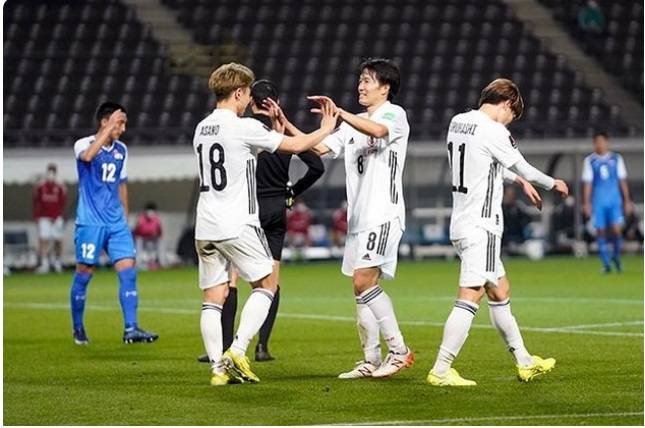 Japan, which is looking to qualify for their seventh World Cup in a row, had not played a qualifier since November 2019 because of the coronavirus pandemic.

But the Blue Samurai showed no signs of rustiness as Southampton forward Takumi Minamino gave them the lead in the 13th minute, before four more goals before half-time put them in complete control.

Nine more after the break gave Japan a perfect record of five wins from five — with 26 goals scored and none conceded — although they have yet to formally clinch their place in the next round.

The game was played behind closed doors in Japan despite Mongolia being the home team, due to virus restrictions.

Minamino started the rout when he rifled a shot past the Mongolian goalkeeper, before Yuya Osako and Daichi Kamada put Japan three up after less than 30 minutes.

Another from Hidemasa Morita and an own goal from Mongolia’s Khash-Erdene Tuya put Japan on easy street at half-time, and Osako made it six 10 minutes after the restart.

Substitute Sho Inagaki then scored on his debut, before two from Junya Ito and one from Kyoto Furuhashi sent Japan into double figures.

Furuhashi notched an 11th to set a new record for Japan in World Cup qualifying before Takuma Asano, Osako and Inagaki added three more before the whistle.

The win gave Japan a perfect record of five wins from five — with 26 goals scored and none conceded — although they have yet to formally clinch their place in the next round.

Denmark routs Moldova 8-0 after the pre-game T-shirt protest.
UEFA ends cap on fan limits in stadiums ahead of Euro 2020.