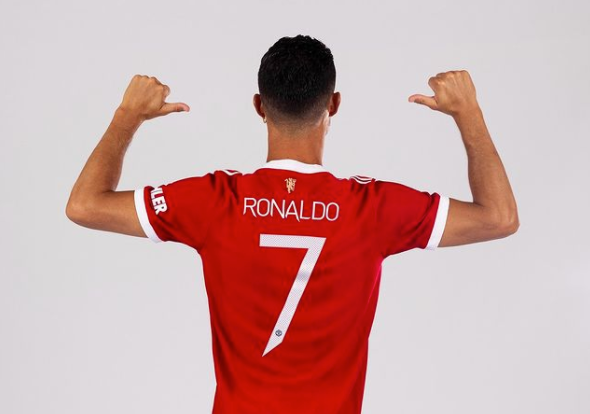 Premier League giants Manchester United have confirmed their star signing Cristiano Ronaldo will wear the No. 7 shirt when he returns to Old Trafford. The star striker rejoined the club from Juventus, just before the transfer window came to an end. The Old Trafford side announced Ronaldo had officially signed on Monday.

On Thursday, Manchester United revealed photos of Ronaldo sporting the United jersey with his name emblazoned on it. Sometime later the club announced that he would wear the No. 7 jersey that has become synonymous with his CR7 brand and the one he wore during his initial stint with the club.

Currently Uruguay striker Edinson Cavani owns the iconic No. 7 jersey at United. Cavani wore it last season and donned it in this season’s victorious game against the Wolverhampton Wanderers on Sunday. United convinced Cavani to switch his current jersey and take the No. 21 shirt, which was vacated by Daniel James, who joined Leeds United. Notably, it is the same number Cavani wears for his national team.

Getting the iconic jersey back wasn’t simple for Manchester United. Premier League rule states that a shirt number cannot be changed once the season has commenced. But the relentless efforts of the club ensured they get a special dispensation from the League’s board and Ronaldo was reunited not only with his old club but also with the prized jersey.

Signifying the change, the Red Devils shared a tweet with an image of Ronaldo and Cavani arm-in-arm during an international match. “Mark of a man,” they captioned the post, which also had a statement from Ronaldo which read,” I wasn’t sure if I would be able to wear the No. 7 shirt again, so I would like to say a huge thank you to Edi for this incredible gesture.”

The No. 7 jersey holds iconic status at Old Trafford, having previously been worn by the likes of George Best, Bryan Robson, Eric Cantona and David Beckham. Since then many players were offered the shirt, but most of them struggled to live up to its expectation. Nevertheless, United fans will be happy to see Ronaldo back in his much deserved jersey.