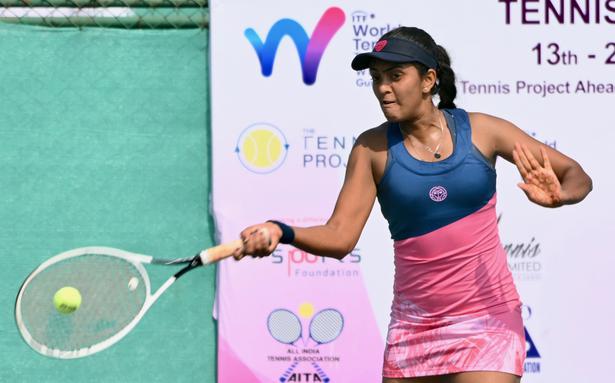 Fourth seed Vaidehi Chaudhari knocked out her doubles partner and top seed Zeel Desai 7-6(5), 6-2 in the semifinals of the $15,000 ITF women’s tennis tournament at the Tennis Project, Baliawas, on Saturday.

It was the third victory in as many meetings in the international circuit for the 22-year-old Vaidehi against Zeel. It was her second entry into the final for Vaidehi, and the first time was also at the expense of Zeel last year in Solapur.

Quite athletic, determined and hitting her strokes with verve, Vaidehi moved Zeel around the court and often caught her on the wrong foot. After a hesitant start, when she dropped serve in the first game, Zeel did fight back to be 5-3 but missed a set point on her serve in the ninth game.Thereafter, Vaidehi took over to assert her ability, finishing both the sets with assurance, even as Zeel slipped into a bunch of errors.

In the final, Vaidehi will play the third seed Punnin Kovapitukted of Thailand who overcame a stiff resistance from Yubarani Banerjee in straight sets.

‘’I am confident, and need to be consistent’’, said Vaidehi.

In the doubles final, however, the top seeds and the champions of last week, Punnin in partnership with Anna Ureke of Russia, was beaten by Humera Baharmus and Shrivalli Bhamidipaty, who started strongly and finished brilliantly by dominating the super tie-break.

It was the maiden title in the professional circuit for both the girls from Hyderabad who packed a lot of punch in their game.