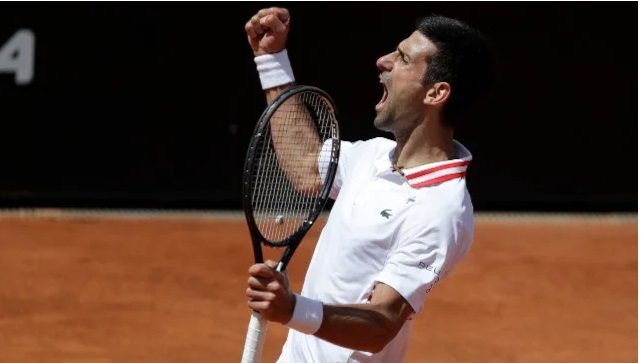 World number one Novak Djokovic survived a three-set battle with Greece’s Stefanos Tsitsipas over two days in their rain-delayed quarter-finals to advance to the Italian Open semi-finals on Saturday.

The defending champion won through 4-6, 7-5, 7-5 after 3hr 16min on court in the clash which had been suspended from Friday because of rain in the Italian capital.

The Serb, a five-time Rome winner, had been trailing 6-4, 2-1 when the game was halted overnight.

Djokovic sealed the match on his second match point to set up a meeting with either Russian seventh seed Andrey Rublev or Italian Lorenzo Sonego later in the day for a place in Sunday’s final.

Swiatek through to semi-finals

The reigning French Open champion won 6-2, 7-5 in 1hr 36min against the Ukrainian in the match which had been pushed back from Friday because of rain in Rome.

A commanding performance from the teenager 👊@iga_swiatek raised her game to take out the No.5 seed Svitolina, 6-2, 7-5.#IBI21 pic.twitter.com/Mfy51NVfvB

Gauff, 17, advanced on Friday to her first clay-court semi-final after world number one Ashleigh Barty retired injured while leading their last eight clash 6-4, 2-1.

The Australian suffered from a recurring right arm issue and chose against taking any risks before the French Open, which she won in 2019, starting on May 30.