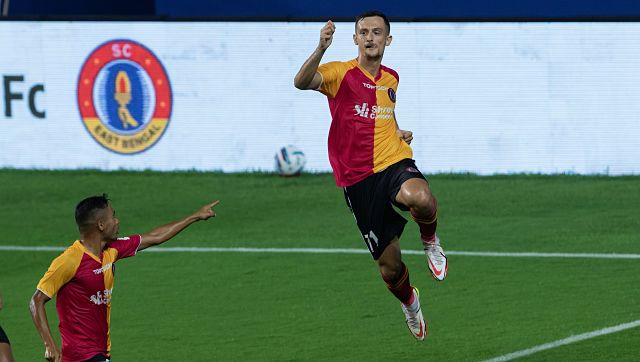 Another week of the 2021-22 season of the ISL has whizzed by. Though the second week wasn’t laden with as many goals, it provided its fair share of entertainment.

The biggest talking point was the demolition job Mumbai City FC did on ATK Mohun Bagan. Both teams contested the final last season but only the Islanders looked anywhere close to their best at the Jawaharlal Nehru Stadium in Fatorda.

FC Goa, meanwhile, found themselves at the other end of the spectrum, losing to NorthEast United. Chennaiyin FC continued their momentum (to an extent), whereas there were encouraging performances from Hyderabad FC and Jamshedpur FC. SC East Bengal, on the other hand, could only accumulate one point, although they did produce another manic encounter against Odisha FC.

There was plenty of action to dissect over the week and with teams breathing a little easier after a hectic weekend, the time is right to delve deeper into what actually transpired in the ISL.

During the first week of the ISL, ATK Mohun Bagan carried with them an aura of invincibility. They had swatted aside the Kerala Blasters and had treated SC East Bengal with as much disdain.

Then, they met Mumbai City FC. Or, in other words, met their match. The Islanders didn’t just defeat the 2020-21 ISL finalists, they annihilated them. So much so that Antonio Habas, who usually seems to have an ace up his sleeve, looked exasperated towards the end.

For the first time in a while, ATK Mohun Bagan looked defensively rattled. Their midfield was left chasing shadows and their full backs accorded the Islanders the freedom of the Fatorda. Unsurprisingly, they were opened up regularly by Mumbai City FC’s pacy forwards.

The defending champions, courtesy of their obliteration, might have even provided the rest of the ISL with a template to defeat ATK Mohun Bagan. If you attack the Mariners with speed and with conviction, their boat, which epitomizes sturdiness but becomes static during tempestuous phases, can creak.

On the flip side, though, the Mariners could argue that the Islanders had to be at their very best. And, that ATK Mohun Bagan had to be somewhere close to their worst.

In fact, such occurrences might not be too frequent because, well, the Mariners haven’t become a bad team overnight. They can still rely on their firepower and Antonio Habas to devise a winning formula. That’s what they usually do too.

The only difference from last week, though, is that the onus is now on ATK Mohun Bagan to prove that this defeat was just a glorious aberration and not an indication of where their campaign might be heading.

The true hallmark of champions is their ability to win when not at their best. During those phases, they might seem the most ungainly version of themselves and might seem anything but champions. But they always find a way.

Against Bengaluru FC, Mumbai City FC didn’t produce the kind of football they are capable of. They seemed a little circumspect and were suffocated by the Blues’ high-octane style, especially in the first half.

As the game progressed, they started finding space down Bengaluru FC’s flanks. More crucially, they were clinical when the opportunities presented themselves, meaning that they ultimately registered a 3-1 victory.

A match earlier, though, is where the Islanders actually hit their straps – that too against ATK Mohun Bagan. And, wasn’t it a sight to behold!

Des Buckingham set his side up to harrow the Mariners into submission. They succeeded in doing so and fashioned numerous scoring opportunities for themselves.

As far as laying down markers is concerned, that was perhaps the closest any team has ever come in the ISL. To top it all off, Mumbai City FC also illustrated that they can roll up their sleeves, get down in the mud and grind out victories.

And, with each passing encounter, it seems that they might just be onto something – much like they did last season.

This time last year, both Odisha FC and SC East Bengal were labouring to make their mark in the ISL. Both had seemed incredibly short in the offensive third.

The major aberration, however, was on the 27th of February 2021, where both teams, rather remarkably, produced a 6-5 score-line that ended in the Juggernauts’ favour.

Both Odisha FC and SC East Bengal were all over the shop defensively. No one thought it was fashionable to track runners and some felt that this game was the best possible match-simulated practice that could be provided to both goalkeepers. The Juggernauts continued that theme against the Kerala Blasters too, eventually losing 2-1. While SC East Bengal were a touch better against Chennaiyin FC, it wasn’t really a performance that dispelled doubters.

Odisha FC would do well to treat this as a learning curve rather than a defining dent to their psyche.  As for SC East Bengal, well, you start wondering what lies ahead.

Back in January 2021, Chennaiyin FC and SC East Bengal played out a scrappy but entertaining stalemate.

Cut to December 2021 and there were eerie similarities to how it all unraveled at the GMC Stadium in January. In January, Chennaiyin FC had fired 14 shots at goal. This time, they had 24 of those. Yet, they never seemed clinical enough to rewrite a script that has threatened to undermine their season again.

Chennaiyin FC have enjoyed a better run of results this season. But if such games become the norm rather than the exception to it, don’t be surprised if the Marina Machans start spiraling in the other direction.

Till a week ago, Hyderabad FC were the talk of the town. They had methodically dismantled Mumbai City FC but then, they played Jamshedpur FC and eked out a scratchy 1-1 draw.

Manolo Marquez saw through the performance and lashed out at his side, even suggesting that the first half against Jamshedpur FC was the worst during his stint at the club.

In that very game, though, Hyderabad FC flicked a switch as the minutes ticked by. The misplaced started finding their targets, Ogbeche suddenly began playing like the third-highest goal-scorer in ISL history and their defenders did just enough to keep the Red Miners at bay after Ogbeche had rescued a point.

Jamshedpur FC were irrepressible in the first half and seemed every bit the side that Owen Coyle has been touting for greatness. They pressed the Nizams persistently. They weaved neat patterns in the wider areas and saw their foreign imports (read Greg Stewart) leave a substantial imprint on the game.

Then, it started falling apart in the second half. So much so that they surrendered the initiative (albeit slightly) to Hyderabad FC and had to eventually be content with a point.

So far, both Hyderabad FC and Jamshedpur FC have illustrated how good they can be, especially if all of their components align linearly. Yet, this game might be remembered more for what they still seek to achieve – consistency.

For much of this past week, NorthEast United FC huffed and puffed. Against FC Goa, though, NorthEast United FC, courtesy of Khassa Camara, found a way to emerge victorious. In a microcosm, that is how football in the ISL works. Two teams scrap for their lives before a moment of brilliance decides games.

Much of the Highlanders’ success in 2020-21 was built on a solid defensive foundation. So far, they’ve tried numerous combinations but haven’t stumbled upon anything worthwhile.

There seems to be a lack of organization in the defensive line. They are leaving too many gaps for teams to exploit and sides more clinical than the Gaurs and the Marina Machans might make things very ugly for the Highlanders.

Against Chennaiyin FC and FC Goa, these aspects stuck out like sore thumbs. That they were saved by Camara, who had only scored one club goal in his entire career prior to Saturday, is emblematic of the topsy-turvy nature of their 2021-22 campaign.

Arduous season ahead for FC Goa

Before the term began, FC Goa had made all the right noises. They had planned a proper pre-season (yes, that happens in the ISL too), won the Durand Cup and had shown the inclination to give youngsters their time in the sun.

After three games, FC Goa are the only team not to have opened their account and have conceded 8 goals as well.

Their defence, seems incredibly light. Ivan Gonzales has tried his best but has, owing to the paucity of resources, been guilty of erring himself. The rest of the back four also seems too reluctant to cut down spaces and have, rather unsurprisingly, struggled against fast counter-attacking teams. In the offensive third, they have, quite simply, not been able to score.

Thus, FC Goa have problems at both ends of the pitch. They are certainly not scoring enough and are most definitely conceding more than what would be deemed ideal.

Everything that they are trying is having a counter-productive effect and unless things take a drastic turn for the better, this could be a very arduous season for FC Goa.

Bengaluru FC head coach Marco Pezzaiuoli has, rather unabashedly, professed his love for high-intensity, high-pressing football. So, when Bengaluru FC hustled and harried Mumbai City FC in the first half on Saturday, it echoed their manager’s words.

To an extent, this is exactly how Pezzaiuoli wants Bengaluru FC to play. Attack relentlessly and defend from the front. The Blues’ biggest compliment was that they restricted Ahmed Jahouh from controlling the tempo and reduced Apuia to minimal touches in the opening period.

Moving forward, there was more verticality to their play. They didn’t dwell on the ball too much and used every opportunity to bring Cleiton Silva, Edmund Lalrindika and Prince Ibara into action.

However, there were also patches in that game where they couldn’t handle the Islanders’ charge and succumbed to their offensive pressure.

From that standpoint, this has already been a bittersweet season for the Blues. They have found new heroes but they have also seen Sunil Chhetri miss penalties and Gurpreet Singh Sandhu look as tentative as he has ever looked.

In comparison to 2020-21, Bengaluru FC at least know where they eventually want to get. But they aren’t there yet.

Hello Kerala Blasters, is that really you?

Over the past couple of seasons, Kerala Blasters have been synonymous with sluggish possession play and pretty dreadful defending. Oh, by the way, their midfield has also not been able to string passes together, especially when the pressure is amped up.

When pitted against Odisha FC, though, all of those aspects took a back seat. Not just did the Kerala Blasters seem unrecognizable to the side that was swatted aside by the Mariners, they looked the sort of team their passionate fan base has been crying out for them to become.

Their defence, in Enes Sipovic and Marko Leskovic’s presence, seemed compact. Slightly further ahead, Jeakson Singh orchestrated the tempo of the game and ensured that the likes of Javi Hernandes and Vinit Rai couldn’t feast.

Up front, Adrian Luna did his thing and set up both goals with sumptuously-timed through balls. Alvaro Vazquez, meanwhile, dealt in the currency that he is known for – goals.

In simpler words, there was everything that you would desire from a top-quality ISL team.

The Kerala Blasters, though, have been here before. They’ve endured several false dawns, meaning that people have begun asking how many false dawns are too many even for them.

At least for the fans’ sake, the Blasters would hope that that narrative doesn’t transpire this time out. But with the Kerala Blasters, you just can’t say.