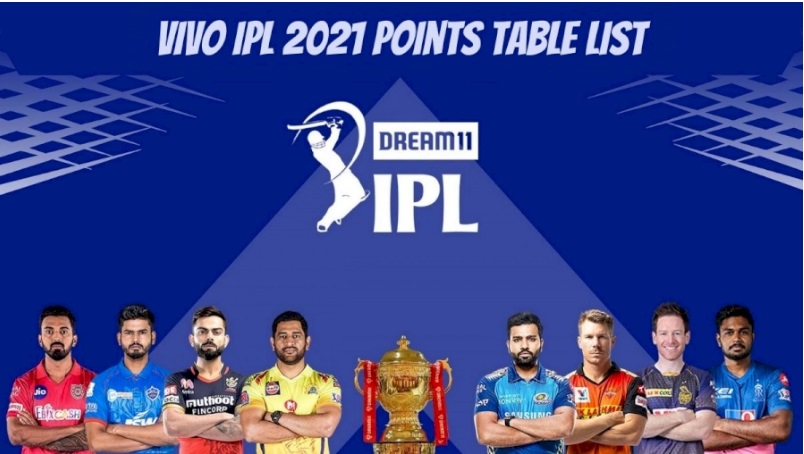 IPL 2021 Points Table: A look at the points table of the Indian Premier League, and the updated Orange Cap and Purple Cap lists after Match 21 between Punjab Kings and Kolkata Knight Riders in Ahmedabad.

Kolkata Knight Riders jumped from the bottom of the IPL 2021 points table to the fifth spot after beating Punjab Kings by 5 wickets in match No. 21 of the Indian Premier League in Ahmedabad on Monday. KKR, who were languishing in the 8th spot with four straight losses made a strong comeback by beating PBKS, who now stands in the 6th spot.

The KKR bowlers were on song after captain Eoin Morgan asked PBKS to bat first after winning the toss. KKR restricted PBKS to 123 and then chased it down in the 17th overs with 5 wickets in the bank, which helped their struggling net run rate.

The IPL points table is led by Chennai Super Kings, who have four wins in five games and also have the best run rate in the league so far. CSK are followed by RCB and DC respectively in the points table.

The 14th edition of the Indian Premier League (IPL 2021) is being played in India. The BCCI decided to host this edition of the tournament in India, after successfully hosting the 2020 edition in the UAE. All the eight teams will play against each other and two points will be awarded to the winner of each match while one point is awarded to either team in case of no result. Matches will go into a ‘Super Over’ in case of a tie. The top four teams in the points table qualify for the knock-outs. The top two teams on the points table lock horns in the ‘Play-off’ and the winner qualifies for the Final. The teams which finish third and fourth on the points table fight it out in ‘Eliminator 1’. The winner moves into ‘Eliminator 2’ where they face the losing team from ‘Play-off’ for a place in the final.

There were no changes in the IPL 2021 Orange Cap list awarded to the highest run-scorer of the season. DC’s Shikhar Dhawan continues to top the chart with 259 runs in 5 matches. He is closely followed by PBKS captain KL Rahul, who has scored 240 runs in the league so far. The No 3, 4 and 5 spots belong to Faf du Plessis, Jonny Bairstow, Rohit respectively.

Harshal Patel who picked three wickets but was smashed for 51 runs, still lead the Purple Cap list with 15 wickets in 5 games. Patel is followed by Avesh Kahn, Rahul Chahar, Chris Morris, and Deepak Chahar in the list for the highest wicket-taker of the tournament.