IPL 2021: MS Dhoni, ‘the greatest finisher’, rolls back the years in emotional win in Dubai It’s the fifth ball of the penultimate over of the Chennai Super Kings innings in Qualifier 1 of IPL 2021, against Delhi Capitals. Avesh Khan steams in and bangs it short outside off. MS Dhoni stands in his crease, sees the ball till the last moment, and smacks the pull.

It’s substantially outside the off stump but he still manages to connect to it maintaining the stillness and composure. There is a fielder at deep mid-wicket but he watches the ball sail over him and into the stands. He’s cleared that long boundary with an 84m six. It’s THAT trademark Dhoni pull. But what catches your attention first is the sound of the bat hitting the ball. It’s probably the sweetest he’s hit a ball in this tournament.

“The sound was like the crack of a rifle,” Sunil Gavaskar describes it on air in the commentary box.

Watching that shot made you feel this might be his day. 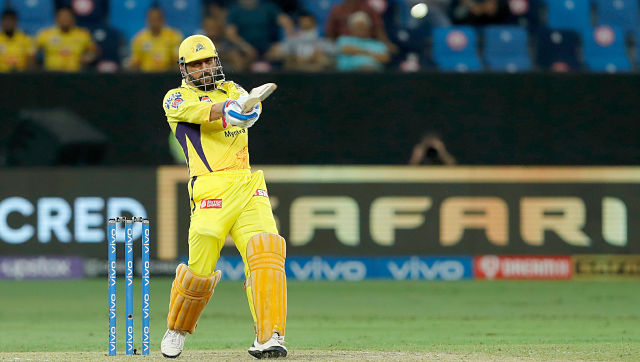 MS Dhoni smashes a pull in the Qualifier 1 against Delhi Capitals in Dubai. Sportzpics

Dhoni arrived at the crease with CSK needing 24 off 11 balls. He hit 18 off them from 6 balls to power the Yellove Brigade into the final.

He came. He saw. He conquered. He rolled back the years.

It made Virat Kohli jump out of his seat in his hotel room.

When it comes to Dhoni there are so many emotions attached. And with each passing day and match, those emotions are getting stronger with the 40-year-old in the twilight of his career. The Dubai International Cricket Stadium was fraught with emotions as Dhoni finished off the chase in style. The camera panned on a family in the stands with a mother, her son and daughter in tears. This is the kind of bond the fans share with ‘Thala’ Dhoni who has been the symbol of CSK since its inception.

Emotions ran high in the CSK dressing room as well.

“It was great. It was emotionally great for us,” Stephen Fleming said in the post-match presentation. “We wish him every time he goes out. We know the pressure he has and the expectation there is on him. Again, he came up trumps for us. It was emotional in the changing room which was very important. But also the captain had the opportunity to do that for us.”

There were shades of Dhoni of the old on display. The cool and calm finisher who aced the death overs. The monster who hit the ball hard and long and off the middle.

There were sparks in between. About 10 days ago he had hit the winning six against Sunrisers Hyderabad in Sharjah. But CSK weren’t in that tough a situation as they were against Delhi Capitals. When Dhoni arrived at the crease against SRH, CSK had needed 27 off 25 balls. There was less pressure. His start wasn’t convincing, he made four off five balls with one tough catch being dropped before hitting a four and then a winning six.

At the Dubai International Cricket Stadium on Sunday, he strode out to the middle with 24 needed off 11. In a playoff game.

A set Ruturaj Gaikwad (70) was just walking back to the dugout. Moeen Ali, who had crossed over, eased the pressure a bit with a boundary over backward point. He followed it up with a single. It brought Dhoni on strike. Avesh delivered a slower one, Dhoni swung and missed. Avesh delivered the next one fast and short, Dhoni spanked it over mid-wicket for a six. The next one was wide outside off, a slower one. Dhoni swung again and missed.

With 13 needed off the last over, CSK were jolted early as Tom Curran’s slower one sent Moeen back off the first ball. But crucially they crossed over. The next one was a slower one again, but short and wide. Dhoni waited and smashed it over extra cover, for four.

With these kinds of chases, you need the luck factor as well. And Dhoni had his, the next ball. With 9 needed off 4, he swung at a relatively full and slower ball outside off but ended up getting an inside edge wide of the stumps for a streaky four to fine leg. The early assault had already put the bowler under pressure. Curran erred in line and bowled it way outside off, which was called a WIDE!

The equation came down to 4 needed off 3. Curran darted it slower and short next ball, Dhoni smashed the pull again, Jadeja, at the other end, erupted in celebration much before the ball had reached the ropes. Raina in the dressing room jumped out of his seat. The stands were sent into a frenzy. There were bear hugs, dance steps and tears.

Dhoni in his quintessential style calmly turned back, shook the umpire’s hand. Then walked down the track to shake Jadeja’s hand followed by a hug and a pat on the back.

It was just another day in the office for Dhoni. He somehow finds a way. He did it again.

It was emotional on multiple fronts. A vintage Dhoni has been rare a rare occurrence for the fans of late. CSK failed to make the playoffs, for the first time, last season and Dhoni had wanted them to “come back stronger”.

And here he was, finishing the match in style and taking CSK into their ninth final in 12 seasons. There was Ravindra Jadeja who was in good form. There was Dwayne Bravo, who had played a brisk 8-ball-23 against MI at the same ground. They could have come in ahead of an out-of-form Dhoni. But the captain took it upon himself to got out there and finish the job, which he has done in the past as well, famously walking out to bat at No 5 to everyone’s surprise in the 2011 World Cup final to neutralise the Muttiah Muralitharan effect and play a masterful innings to help India lift the trophy.

“There was a lot of chat. We spoke more in those 20 overs than we have for a long time,” Fleming would later reveal in the post-match conference. “There was a lot of technical discussion and manoeuvring to try and work out how this was going to unfold and who was going to make the maximum impact. But I tell you what, When the captain gets looked in his eyes, he said ‘I’ll go’. It’s been well-documented the times that he has done that. Today was one of those. I ain’t holding him back, and we saw the result of that.”

Yes, he hit 18 off 6 balls. Yes, he finished off the game. Yes, he brought so much joy to his fans. But as always, for a selfless Dhoni, it wasn’t all about himself. It was about the team.

“What an innings, tell us about your own innings,” Harsha Bhogle asked Dhoni in the presentation ceremony. “I am going to ask you about everybody else but first tell me about yours.”

Dhoni replied, “Well, it was a crucial one. Because if you see, Delhi has a very good attack and they exploited the conditions well, using the bigger boundaries. So I felt it would be tough, that’s why we wanted the batters to continue till the end, so that we had only one way to go in the last four or five overs….

Harsha interrupted…”No, this is about you, tell us about your finish…”

“Nothing you know…watch the ball hit the ball,” came the simple reply. “I’ve not done a lot in the tournament, so you have to get that part out of the system saying if you are batting well in the nets, just look for the ball, what are the variations and what the bowler may look to bowl. So, other than that there was nothing much in the mind. Because if there are too many things floating around, it becomes difficult to watch the ball.”

“The Thala has taken the Yellove back into the final?” Bhogle asked.

“It’s the full team (effort), it was tough,” Dhoni replied. “It was the first time we didn’t qualify so the emotions were quite high but what was important was whatever games were left (in 2020), we wanted to make sure that we make the most use of it. Forget what has happened in the tournament but those 3-4 games (a the end in 2020), you know you wanted to make the most of it and I felt a lot of batters made the most of that and that’s the reason we’ve come back strongly and also the credit goes to the support staff and each and every individual because without their character, you can’t really come back like this.”

There was that powerful pull into the stands. That tennis ball smash over extra cover and that winning four as well. But the moment of the day arrived after the match when Dhoni popped up a signed ball from the dressing room to the children (brother-sister) who were earlier pictured crying in the stands.