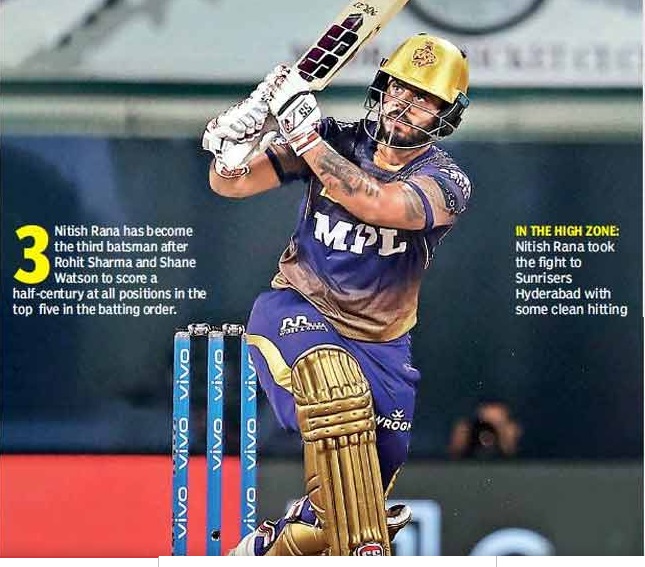 The resigned look on skipper David Warner’s face said it all. With Kolkata Knight Riders hitting their straps from the get-go, there was little the Sunrisers Hyderabad skipper could have done but wonder what could’ve been after he put the opposition in.
The Knights found the gaps at the MA Chidambaram Stadium in Chennai on Sunday with their left-right opening combination of Nitish Rana and Shubman Gill getting along like a house on fire. Their bowling unit nicely complementing the batting effort.

Rana has been an important part of the KKR outfit ever since he was acquired by them in 2018 and he once again proved his worth with an impressive 80 (56b, 9×4, 4×6), an innings of percentage cricketing shots that powered his team to 187 for six.

Unlike KKR, Sunrisers suffered for want of momentum and finished at 177 for five to fall short by 10 runs despite Abdul Samad’s late charge – the same margin by which they lost to RCB in their first match the last edition.

Let off by Pat Cummins (1/30) off the first delivery he faced from Harbhajan Singh, Warner succumbed cheaply to beauty from Prasidh Krishna (2/35) and Wriddhiman Saha chopped Shakib Al Hasan on to his stumps as SRH slid to 35 for two in the Powerplay.

KKR had no such issues as they motored to 50 in five overs. The Powerplay overs were nicely utilized until Nabi, hit flush on the neck by a Prasidh delivery when he batted, stepped in with the ball. He cut the run-rate and Rashid Khan (2/24) then got into the act, but in the end, KKR had too many on the board.
Gill was deceived by Rashid’s googly and castled. But Rahul Tripathi (53; 29b, 4×5, 6×2) and Rana’s 93-run second-wicket partnership in 50 deliveries furthered the cause of KKR. It was carnage from both ends with Tripathi adding deft touch to bluster in good measure.