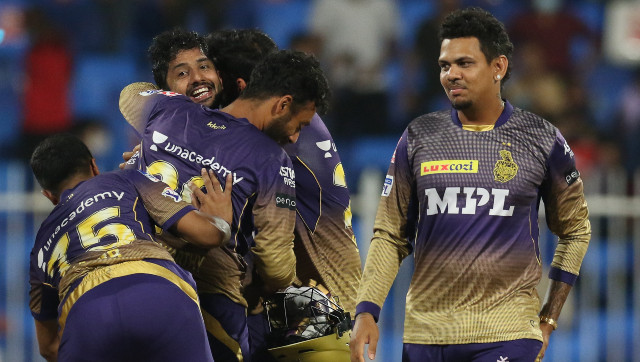 If the Indian Premier League is home to the best of T20 Cricket, it also has been the production line for some of the best dramas in the sport. If not for Rahul Tripathi’s penultimate ball six that helped Kolkata Knight Riders reach their first final since 2014 by the skin of their teeth, the inexplicable collapse from the team’s batting in the second qualifier almost scripted the biggest choke in cricket.

From 13 required off 25, KKR stumbled to 130/7 from 123/1, losing six wickets for just seven runs in a space of 23 deliveries. It wasn’t an international game, but we are certain somewhere it kept Lance Klusener and Allan Donald interested in its outcome. The collapse, however, fitted well in a game that had teams playing poor cricket from the start.

KKR had outlasted Royal Challengers Bangalore at the same venue (Sharjah) two days back in another low-scoring game to make their way into the second qualifier. On the other hand, their opponents Delhi Capitals were coming to the venue from Dubai after suffering back-to-back defeats. Rishabh Pant-led Delhi topped the league table but defeats in the last two matches combined with shift in venue, where KKR had a record of three wins from three, had the odds stacked heavily against them.

At the sluggish Sharjah ground, the margin for errors has been very small this season. Delhi needed to play perfect cricket to thwart KKR’s bowling which was well-suited for the slowish nature of the track. KKR’s trio of Shakib Al Hasan, Sunil Narine and Varun Chakaravarthy had been strangling teams with slow spin bowling at the venue, and so DC decided to include an extra batsman for the all-important qualifier.

In came all-rounder Marcus Stoinis for pacer Tom Curran. However, not many would have foreseen him coming out to bat in the fifth over, ahead of Shreyas Iyer and Pant. Stoinis has largely played the role of a finisher for DC, but on Wednesday, he was asked to play as a top-order batsman in an attempt to break the rhythm of KKR bowlers. The move, however, proved to be a tactical blunder from coach Ricky Ponting and DC.

It’s easy to criticise in hindsight but Stoinis’ promotion to No 3 batting spot has little cricketing logic supporting it. When DC lost Prithvi Shaw early on, the time was ripe for Shreyas Iyer or Pant to walk in. As good players of spin and with the ability to rotate the strike, it was exactly what DC need at that time, instead, they sent in Stoinis who had just recovered from a hamstring strain and was playing his first match since 22 September.

The Australian laboured to an 18 off 23 as Delhi got themselves into a rut, surrendering the initiative after making a brisk start. Iyer was forced to come out to bat in the 12th over which was later than he’s generally accustomed to and it showed. The Mumbai cricketer is not your typical T20 batsman who can set the stage on fire from the word go. He dealt in singles for a while and eventually the two boundaries he hit in the last over helped take his strike rate past 100. Pant’s entry into the middle was also delayed and he fell cheaply, making six off six. Marcus Stoinis’ knock of 18 off 23 allowed KKR to apply strangle on DC. Image: Sportzpics for IPL

DC’s inability to impose themselves on KKR bowlers at a time when the ball was still new and hard resulted in a fag end struggle, with them posting a below par 135/5.

Delhi have had the best bowling attack in the tournament but bowlers need the support of fielders to excel at their jobs. Defending a low total demands 110 percent from the fielders, but Delhi fluffed under the pressure, dropping crucial catches and giving away runs by silly misfields.

Venkatesh Iyer was dropped on 23 in the fifth over by Kagiso Rabada off his own bowling. The opener would go on to make a match-winning 55 off 41, forging a 96-run opening partnership with Shubman Gill.

It was Nitish Rana’s dismissal in the 16th over that opened the floodgates for Delhi but it came after the batter was dropped by R Ashwin at third man on the first ball of the 14th over. One wonders what the outcome of the match would have been if Ashwin had taken the sitter. There were also frustrating misfields and overthrows to add to the woes which at crucial junctures allowed the release of pressure.

Brain fade by KKR at the death KKR lost six wickets in space of 23 deliveries in the death to give DC a ray of hope. Image: Sportzpics for IPL

DC were substandard in the high-profile game, in comparison KKR played some good all-round cricket from the start but their the worst was to come at the last.

Despite losing Rana on the last ball of the 16th over, the equation was heavily in their favour. 13 needed from the next four overs looked like a walk in park with Gill and Tripathi batting and Dinesh Karthik, Eoin Morgan, Shakib and Narine still to come in. But it was anything but that. KKR’s experienced batters fell like a house of cards.

Gill got out edging a wide delivery. Karthik got bowled slogging across the line. Morgan chopped on after throwing his bat on an outside off ball. Shakib was out LBW trying to play a scoop. And Narine holed out the first ball at long-off.

While Shakib and Narine’s dismissal came in the last over, Rana, Gill, Karthik, Morgan, all had ample time to rotate the strike, to apply the smarts and secure a comfortable win. Instead, all they did was try to slog their way to victory, leading to a batting hara-kiri that was salvaged just in time by Tripathi.

The victory helped KKR reach their first final since 2014 and they will now be moving away from their happy hunting ground to Dubai for the summit clash against Chennai Super Kings. T20 cricket and unpredictability are partners in crime, but MS Dhoni’s match-winning cameo in CSK’s thrilling chase in Qualifier 1 is enough signs that the veteran remains the calmest mind in the sport and KKR can’t afford another brain fade.